Reason being, it is my job to prepare you for the next financial crisis – so that you can make money no matter what’s coming down the pike.

Of course, the biggest part of that involves me covering everything from geopolitics to international trade to economics. I break it all down for you.

Another part is giving you the tools necessary to catch warning signs yourself.

Copper: The Commodity with a Ph.D. in Economics

When most people think about commodities that are closely linked to the economy, they think of things like oil or steel.

But they’re stopping their line of thinking short.

Copper and its alloys are used in countless ways – ranging from electrical wiring and water pipes to doorknobs and automobile defrosting systems.

In fact, copper has so many economic uses that it’s nicknamed “Dr. Copper… the commodity with a Ph.D. in economics.”

As such, copper is a great indicator of where the economy is headed.

When the economy is growing… copper is in high demand, and copper prices rise.

Let’s take a look at copper’s long-term chart below to illustrate this point.

Highlighted in the first box, you can see that copper prices experienced a sharp rally from 2009 to late-2011 This represents a period in which the economy was growing aggressively as the world exited the great financial crisis.

From 2012-2016, copper prices gradually fell bit by bit. This represents a time in which the economy was stagnating. (It wasn’t in a free-fall like that of the 2007-2009 recession, but growth was lackluster nonetheless.)

Now for the third box. 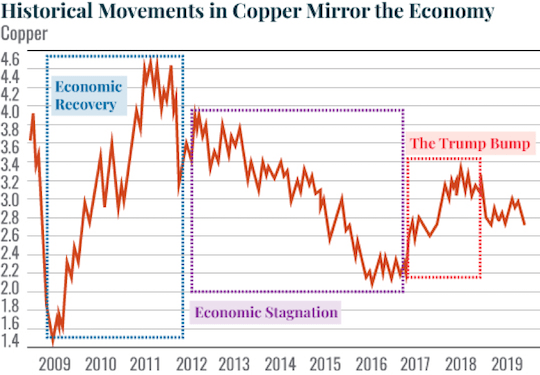 That brings us to today…

Copper prices are once again rolling over – signaling that economic growth is stalling.

Copper and Bonds in Agreement: The Economy is Slowing

We already know that the recent bond yield inversion is a MAJOR warning that the economy is moving into dangerous territory.

In fact, in early August copper hit its lowest level since June of 2017.

Now, this doesn’t mean that a recession is at our doorstep just yet.

But it IS a warning that one may be approaching…

The good news? Investors who are properly prepared have the opportunity to mint a new fortune from the downturn…