I’ve been receiving a lot of questions about the recent rally in gold.

After trading sideways for the better part of five years, the precious metal has been on a tear, roaring higher by almost $300 per ounce. This momentous climb higher is shown on the chart below. 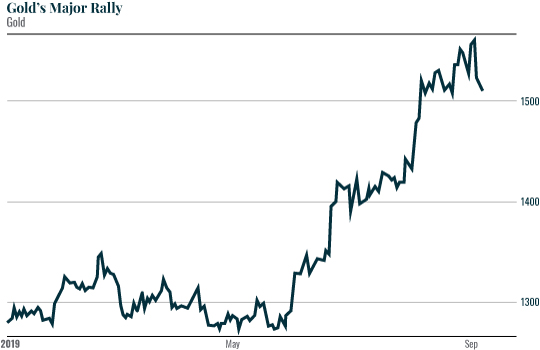 There are multiple reasons for this, but all of them boil down to the same thing…

It is now clear that central banks cannot normalize monetary policy ever.

The Fed, the European Central Bank (ECB), and the Bank of Japan (BoJ) are all talking about cutting interest rates and introducing new Quantitative Easing (QE) programs through which they print new money to buy assets.

This comes after 10 years of the most extraordinary central bank monetary policy in financial history.

The ECB and BoJ currently have interest rates at NEGATIVE. The Fed will be joining them sometime next year. This is forcing the bond market to move into negative yield territory in which lenders are PAYING borrowers for the right to lend them money!

THIS is why gold is rallying.

With over $19 trillion in bonds currently having negative yields… gold, which has a yield of ZERO, is actually looking attractive in relative terms.

Indeed, gold is now looking more and more like a standalone currency: one that cannot be devalued by central banks. As such it is extremely attractive relative to the U.S. dollar, the Euro, and the Yen.

This explains why the precious metal has broken out against all three of those currencies. 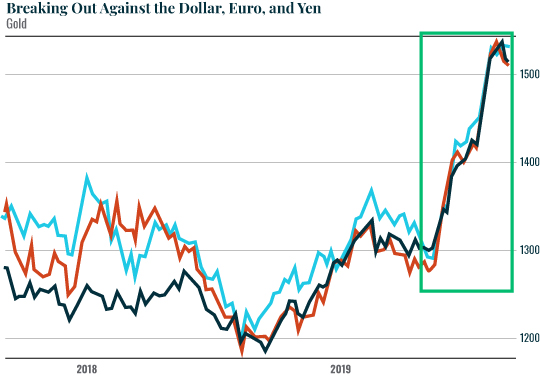 Put simply, gold is telling us that central banks are about to engage in another round of extraordinary monetary policy. And as gold has already shown us, if you time this correctly you could make a literal fortune…

In particular, currency traders locked in unbelievable returns during this time period. And I believe we are about to enter another one just like it.