In its simplest rendering, World War III will consist of central banks implementing aggressive monetary policies in an attempt to:

The big question has been: when will World War III start?

The European Central Bank Unleashes Monetary Napalm on the U.S. and China

After promising a major move for the better part of a month, yesterday the European Central Bank (ECB) announced that it would:

In one single meeting, the ECB introduced not one but THREE major easing programs.

Not only did the ECB cut rates, but it also introduced an “open-ended” QE program, meaning that this program could run forever (there is no target end date) while also giving EU banks access to cheaper credit.

Put simply, this was a “nuclear bomb” of central bank policy. And it will be hitting the U.S. and China hardest – Europe’s two largest trading partners.

The ECB’s verbal intervention promising these moves, as well as the moves themselves, had a massive effect on its currency.

Below you’ll find a chart of two currency pairs:

These lines falling indicate that the euro has been collapsing against the U.S. dollar and the Chinese yuan over the last three-four weeks. 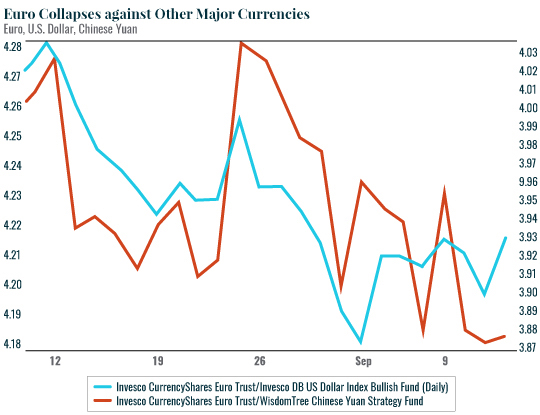 The question now is how China and the U.S. will retaliate.

Neither country has a choice. With every major nation saturated in debt, none of them can afford to have a strong currency. Reason being, the stronger your currency, the more “expensive” it is to service your debts.

Big Picture: World War III just began. And before the smoke clears, we’re going to see a crisis even bigger than 2008.

But if I had to use a template for where we are now, what the ECB did yesterday tells me we’re in the equivalent of “late 2007” for the next crisis.

And really, that’s the exciting part…

With the right strategies, a crisis can mean generating LITERAL FORTUNES.

Yesterday I discussed the Deep State attempting an act of economic terrorism against the U.S. And now, the U.S. Treasury market is aware of this plot…