To recap, they were:

In one single meeting, the ECB introduced not one but THREE major easing programs.

Not only did the ECB cut rates, but it also introduced an “open-ended” QE program, meaning that this program could run forever (there is no target end date) while also giving EU banks access to cheaper credit.

On Friday, I wondered aloud how the U.S. would likely retaliate. President Trump has already given us a few clues…

Negative Interest Rates Are Coming to the U.S. 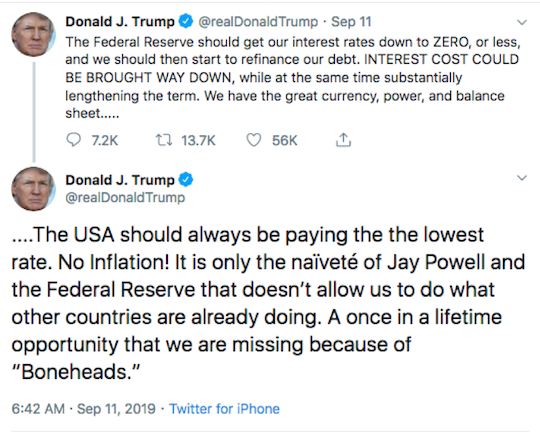 Here, the President is urging the Fed to cut interest rates to zero if not NEGATIVE.

Yes, we are talking about NEGATIVE INTEREST RATES – rates that require the lender to PAY the borrower for the right to lend him or her money, coming to the U.S.

And it’s the President, not some conspiracy nut, urging this!

The impact would be truly incredible. It’s one thing for the ECB to launch negative rates, it’s something else altogether for the Fed to do the same. After all, the Fed controls the U.S. dollar, the reserve currency of the world comprising over 90% of global currency transactions.

Why would President Trump want to do this?

Because he knows a crisis greater than 2008 is coming… and he wants to restructure the U.S.’s debt in advance, thereby improving its position relative to its trade partners.

How to Profit from the Currency Wars

The fact that President Trump is openly calling for zero if not negative rates now tells us that the next crisis is A LOT closer than most imagine.

But if I had to use a template for where we are now, what the ECB did last week tells me we’re in the equivalent of “late 2007” for the next crisis.

And really, that’s the exciting part…

With the right strategies, a crisis can mean generating LITERAL FORTUNES.