If these policies sound insane to you, prepare yourself – they’re soon coming to the U.S. President Trump has made it clear he is open to the Fed cutting rates to NEGATIVE territory.

Negative Interest Rates Are Coming to the U.S.

Take a look at the tweets below. 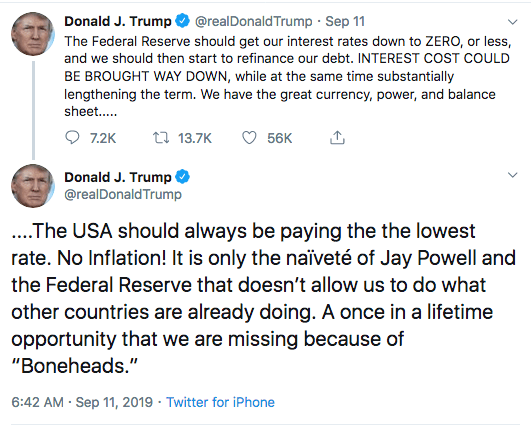 As crazy as this sounds, the President doesn’t have a choice. If other nations begin using negative interest rates to aggressively weaken their currencies against the U.S. dollar, it puts the U.S. at a massive disadvantage.

Which is why the U.S. will be forced to enter the currency wars soon.

And so will Japan.

Japan Prepares to Go Even Deeper Into Negative Rates

Yesterday the media reported that the Bank of Japan (BoJ) is considering cutting interest rates even deeper into negative territory. Rates are already at negative 0.10% in Japan.

Folks, this is WWIII: a global military conflict in which monetary policy is weaponized. And it’s going to lead to a crisis worse than 2008.

But if I had to use a template for where we are now, we’re in the equivalent of “late 2007” for the next crisis.