Stocks get most of the attention from the financial media, because most investors think of them as the most important asset class.

The Dollar is the King of Currencies

When you look at the currency markets, the first thing you need to look at is the U.S. dollar.

The U.S. dollar is the reserve currency of the world. Everyone and I do mean EVERYONE uses the dollar to trade.

Remember how I told you that the currency markets trade $6.6 trillion in volume per day?

With that in mind, consider that the U.S. dollar has been moving upwards in a clear channel for the last year or so. You can see this in the chart below. 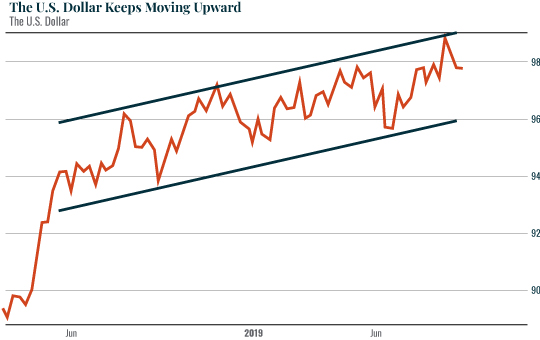 This channel is preparing to breakout, either up or down, based on what the Fed does in the next day or so.

When that breakout occurs, the entire financial system will adjust, offering traders the opportunity to profit from the $6.6 trillion in currency volume moves this way and that as other currencies change based on what the U.S. dollar is doing.

And best of all, because of its size, you only need to be in the currency markets a day or two to see massive returns.

A Personal Apology from Graham Summers

You’ve been missing out… and it’s my fault!