Yesterday, I outlined how the stock market is actually one of the smallest markets on the planet.

As a brief recap, globally the stock market is around $80 trillion in size.

The bond market is over three times that – sitting at $244 trillion.

And the currency markets are more than 30 TIMES LARGER based on volume – trading over $6.6 trillion in volume every single day.

To put that number into perspective, it’s larger than Japan’s GDP: the total annual economic output of the entire country.

And the currency markets trade it Every. Single. Day.

Put simply, based on volume alone, the currency market is 33 times larger than the stock market. This is the largest, most liquid market in the world.

So when a major change occurs, it hits these markets first.

Last week was a great example of what I’m talking about.

Early in September, I noted that the Canadian dollar (FXC) had rallied aggressively along with the price of oil. I knew that Canada’s central bank (the Bank of Canada) wouldn’t want the currency this strong and would soon intervene in the market. 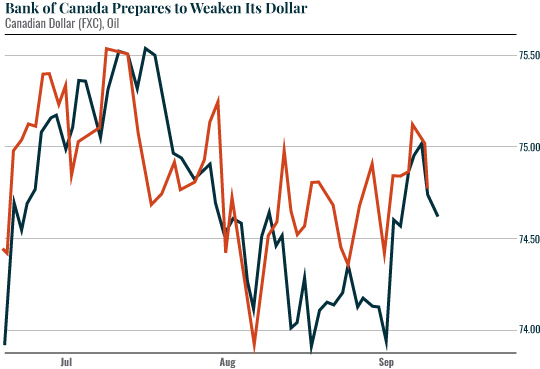 I quickly sent out a real-time alert to subscribers of my Alpha Currency Profits to open one of our proprietary trades to profit from the Canadian dollar weakening.

Sure enough, the Bank of Canada stepped in and the Canadian dollar collapsed. We locked in a 52% return in just six days. 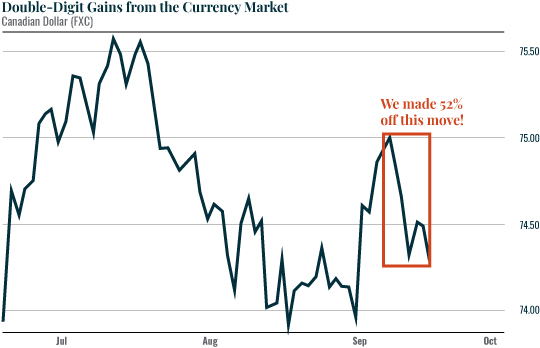 And that was actually one of our slower trades!

Buckle Up: We’re About to Get Another Big Trigger in the Markets!