As I’ve been warning for several weeks, World War III has begun.

At that time, I noted that it was only a matter of time before the U.S. and Europe’s other major trading partners “returned fire” by launching their own monetary programs.

You see, in a world completely saturated with debt, no major country can afford to have its currency strengthen too much. The stronger the currency, the more expensive it is to service your debt (each unit of currency is worth more).

Which is why, as soon as Europe chose to devalue the Euro by printing money and cutting interest rates, I knew it was only a matter of time before the U.S. responded.

Last week it did.

QE is a monetary policy through which a central bank prints new money and uses it to buy debt from financial institutions.

When the Fed launches QE, it does two things:

Since 2018, the Fed’s balance sheet was in a downtrend as it shrank via the Fed’s Quantitative TIGHTENING (QT) program.

QT is QE in reverse: The Fed allows its balance sheet to shrink, withdrawing capital from the financial system.

But last week this all changed. The Fed’s balance sheet began to grow… and not by a little, but by a whopping $75 BILLION in a single week.

To put that number into perspective, at its most aggressive QE program back in 2013, the Fed was doing $80 billion worth of QE per month.

It just did that in the span of five days.

That point is NOW.

And it’s opened the door to the single greatest profit-making opportunity of the last 15 years.

When a central bank goes nuclear with monetary policy, it opens the door to extreme volatility in its currency.

The last time the Fed was engaged in these kinds of policies from 2010-2012, the U.S. dollar was a trader’s paradise, whipsawing this way and that. If you were able to “get in, profit, and get out” of the U.S. dollar during this time period, you could have generated a literal fortune. 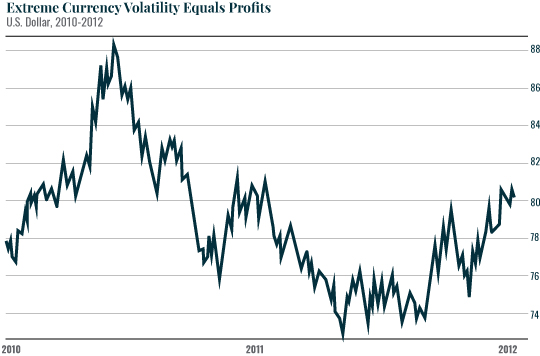 With the Fed now engaged in NUCLEAR rounds of monetary policy, the gains will be even bigger.

That’s why I specifically designed my Alpha Currency trading strategy to use currency ETFs – I wanted the massive returns without the risk.

We now know that the Everything Bubble has burst –signaling the financial system might be headed for another crisis. Here’s how the Fed will try to “patch” it back together before that happens...

A Credit Crisis is Looming – Coronavirus Just a Distraction