Over the last few days, I’ve been detailing how the Fed has secretly launched another Quantitative Easing (QE) program.

As a brief recap, QE is a monetary policy through which a central bank prints new money and uses it to buy debt from financial institutions. And the Fed is back doing this in a big way – with a whopping $75 BILLION worth of QE in a single week.

To put that number into perspective, at its most aggressive QE program back in 2013, the Fed was doing $80 billion worth of QE per month.

It just did that in the span of five days.

This of course, begs the question… why is the Fed doing this?

The answer is simple: debt.

The Fed is “Inflating” the U.S.’s Debt Away

The U.S. is completely saturated with debt on a national, state, local, corporate, and even personal level. The below chart, from my bestselling book The Everything Bubble: The Endgame For Central Bank Policy, illustrates this well.

And by the way, the numbers on the y-axis are in trillions of U.S. dollars. 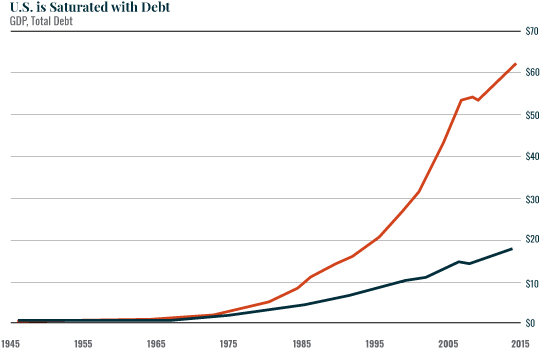 Now, once a country is so indebted that it can never pay back its debts, there are only two options:

No one at the top of the political/financial pyramid wants option #1 because it would mean a crisis exponentially worse than 2008.

Remember, U.S. government debt, called Treasuries, is the bedrock of the current financial system. So if the U.S. were to formally default on its debts, the system would implode.

This leaves option #2: Inflate the debts away.

In this scenario, the Fed devalues the U.S. dollar, on purpose, so that all future debt payments will be made in dollars that are worth less.

Based on the Fed’s decision to start expanding its balance sheet via QE, it is clear that this is precisely what the Fed intends to do.

The reality is the U.S. dollar has been in an uptrend since 2011 (orange rectangle in the chart below). The Fed wants for the U.S. dollar to breakdown and start a steady decline like the one that occurred from 2000-2011. 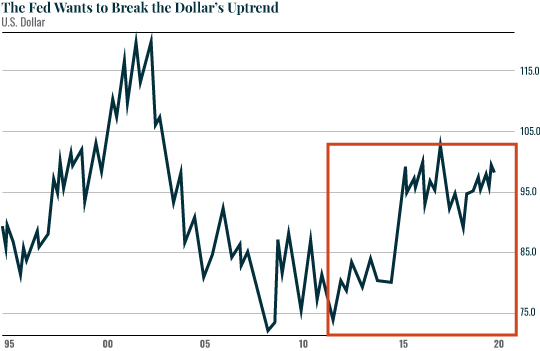 This is literally the only option the Fed has. Which is why the BIG MONEY trades going forward will all hinge on using currencies, like the U.S. dollar, for outsized gains.

On that note, I’ve spent the last six months perfecting a system of trading currencies based on central bank actions.

It’s called Alpha Currency Profits. Since its launch, it has shown traders returns of: