Yesterday I noted that the market could be preparing for a blow off top.

The reason for this is simple…

Investment funds are improperly positioned. They piled into the safe haven of U.S. Treasuries based on the assumption that the U.S. economy was going to enter a recession in the second half of this year. 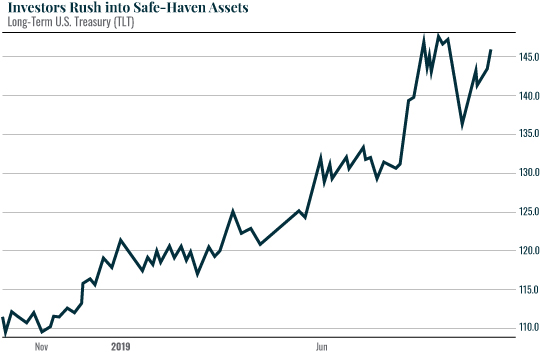 The bad news for these folks is the recession is not coming… at least not yet.

The Bond Market is No Longer a Safe Predictor of Recessions

The truth is that the bond market’s ability to forecast recessions has been compromised by the Fed. While it’s true that historically bonds have accurately predicted recessions well in advance, investors need to remember that the last 10 years have been anything but normal when it comes to bonds.

You can thank the Fed for this.

As I noted in my bestselling book The Everything Bubble: The Endgame For Central Bank Policy, following the 2008 Crisis, the Fed moved to corner the bond market.

The Fed did this in two ways:

Put simply, because of the Fed’s actions, the entire bond curve became “artificial” as it was based on Fed interventions. As a result, bond market actions that historically have predicted recessions (yield curve inversions) are no longer as significant as they once were.

Consider that while bonds have been predicting a recession for months now, the latest GDP number shows 2Q19 growth at 2%. This is similar to the 2.9% increase in sales for Walmart in 2Q19, the largest retailer in the U.S.

Meaning, the U.S. is not in recession.

True, the pace of growth slowed, but the slowdown appears to be reversing now. Which tells us that the extreme defensive positioning by investors is likely misguided.

Does this mean stocks might not correct? We could easily see a correction down to 2,800 on the S&P 500. 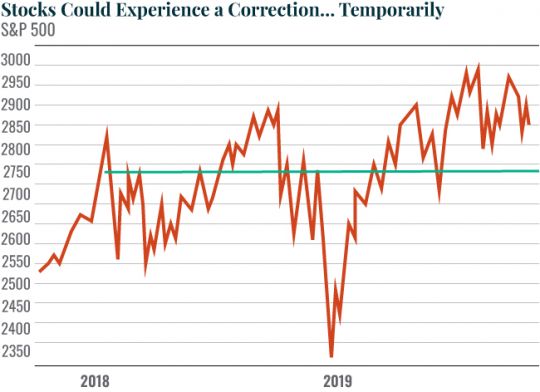 But after that, I would expect to see stocks bottom and prepare for a fourth quarter rally into year-end.

Unless the financial system is about to enter a full-scale crisis right here and now, investors’ cautionary positioning is beyond extreme. And remember, GDP is still growing at 2%!

Again, the door is open to a blow off for stocks. And I’ve already shown subscribers of Strategic Impact a secret investment designed to explode higher when the market begins to rally again…

I’ll be telling you all about the details of this newsletter in the coming weeks.

Dinner with the Trump Family

A couple of weeks ago, something extraordinary happened.