Back in 2017, when I published my bestselling book The Everything Bubble: The Endgame For Central Bank Policy, I predicted that at some point the Everything Bubble would burst and the Fed would be forced to launch what I called “NUCLEAR” quantitative easing (QE) programs to try to reflate the system.

At that time, I was mockingly called “Dr. Doom” by interviewers and ridiculed for making such outlandish predictions.

My critics pointed out that the Fed had successfully ended its final QE program in 2014 and was in the process of normalizing monetary policy. Moreover, they proclaimed that there was no bubble in bonds and the idea that the Fed would one day print $100 billion or more in a month for a QE program was borderline lunacy.

Fast-forward to mid-2018 and the Fed did indeed burst the bubble in Treasuries.

I called this bubble the “Everything Bubble” because these bonds are the backstop for the entire financial system. And thanks to the Fed’s misguided monetary policies, the yields on these bonds broke their 30+ year downtrend in June 2018. 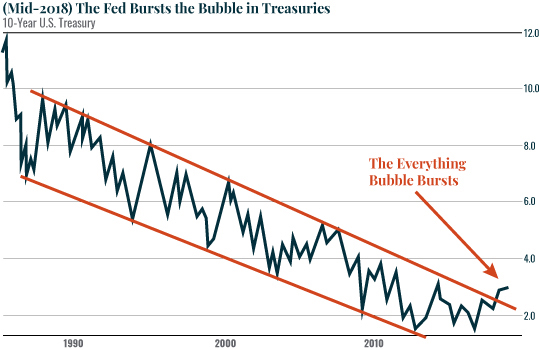 The Fed tried to keep things under control until December 2018, when the stock market began to implode (orange rectangle in the chart below). At that point, the Fed panicked and abandoned all talk of normalizing its monetary policy. 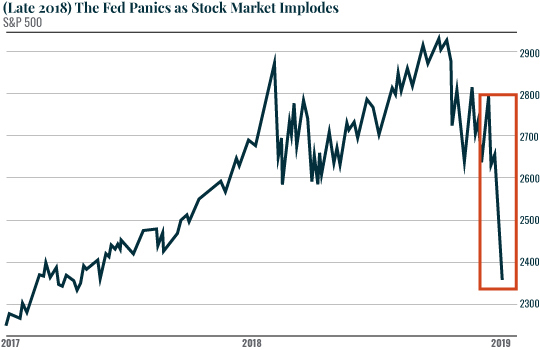 Since that time, the Fed has cut rates TWICE. And just last month, it launched QE. And not just a little, it went NUCLEAR… just as I predicted years ago.

The Nuclear Rounds of QE Have Officially Arrived

That’s a difference of $176 BILLION. And the Fed did this in just three weeks.

Take a look at the Fed’s balance sheet in the chart below. Notice how its balance sheet growth went almost vertical a few weeks ago. That’s NUCLEAR QE. 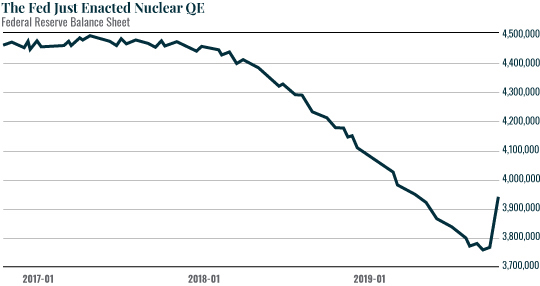 Put simply, stocks are not reacting to the Fed’s QE the same way as they did from 2009-2014. At that time, whenever the Fed pumped liquidity into the financial system, stocks erupted higher.

So if stocks aren’t responding to the Fed’s QE, what is?

More on that in future issues of Money & Crisis…

The mother of all economic bubbles is upon us…