If you’re looking to see REAL, life changing returns from your investments, one of the single most important things to know is that markets move based on liquidity, NOT the economy.

Perhaps the single best example of this was the period from 2009-2017.

By practically every measure, the U.S. economy was weak at best throughout this time period. The economy didn’t have a single year in which GDP growth hit 3%. Over 90% of jobs created during this time period were part-time. And the number of people who were of working age but not working rose by 14 million.

And yet, despite this pathetic economic performance stocks more than doubled during this time period. 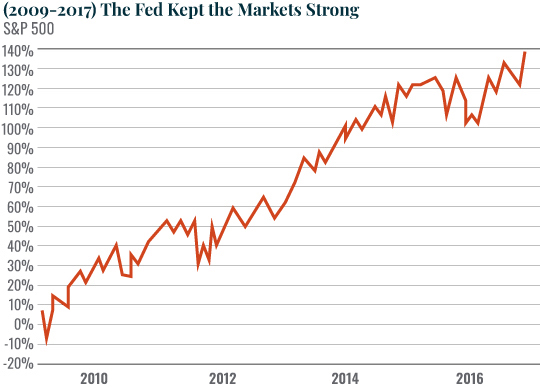 Because the Fed provided over $3 TRILLION in liquidity to the financial system during this time period.

To be clear here, there are times when the economy can have a profound impact on the markets. But those times are typically brief and based on significant surprises, such as a recession or a sudden and unexpected boom.

Every other time, it is liquidity that drives markets.

Which is why anyone who is paying attention to what the Fed is doing is getting ready to “pull the trigger” on some incredible gains.

In the last four weeks, the Fed has pumped $180 BILLION into the financial system.

That is not a typo. $180 BILLION, or more than TWO TIMES as much liquidity as the Fed pumped into the system during its last major QE program (QE 3 provided $80 billion in liquidity per month).

This means we are on the cusp of MAJOR market moves. And while the average investor will be using stocks to see average returns, smart investors will be using the Fed’s activity to play the single greatest market on the planet.

Stocks typically return 7% on average per year. During exception years, you might see 20% returns.

My Alpha Currency Profits subscribers, who instead trade currencies, see THREE TIMES those kinds of returns in in a single week.

On August 30 2019, Alpha Currency Profits recorded an “Alpha Signal” in the Australian Dollar.