I’ve received a number of emails concerning the trade deal that was announced between the U.S. and China last week.

The sad reality is that this isn’t much of a deal… at all.

The initial breakdown of the deal is as follows:

Treasury Secretary Steve Mnuchin suggested there would be even greater aspects of the deal made public as China and the U.S. hashed out the details of its “Trade Truce” in the coming week.

All of this seemed like a relatively big win for the Trump administration. China would open up its economy and boost its purchases of U.S. agriculture, thereby alleviating some of the pain American farmers have experienced as a result of the Trade War.

And then China threw cold water on the proceedings.

The Partial Trade Deal was Short-Lived

On Tuesday, China announced it would only buy the $50 billion in agriculture from the U.S. IF the Trump administration rolled back its current tariffs.

And just like that, the deal is dead. For now.

The Trump administration has ZERO interest in dropping its tariffs. So if China wants to play hardball on this issue, we can expect a worsening of trade relations in the near future.

As it stands, there are several weeks before the trade deal is expected to be signed in November. A lot of things can happen between now and then, but as it stands, there doesn’t actually appear to be any real progress between the two nations.

And the markets know it.

A Real-World Barometer for Measuring the Trade Talks

Chinese stocks have been in a downtrend for the better part of the last year. They did stage a breakout on Friday’s announcement, but are now already rolling over. 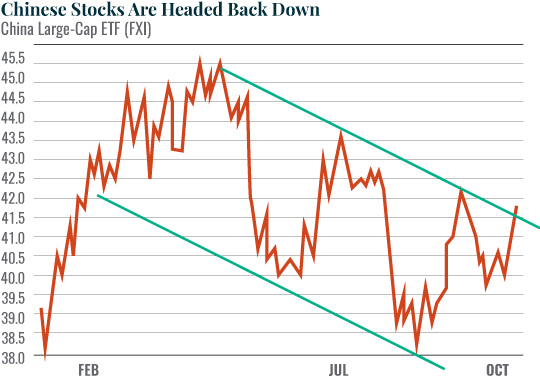 If a trade deal was about to manifest, China’s stock market would explode higher. It’s not. It’s barely able to stay afloat even after the announcement of a so-called deal.

Keep an eye on the China Large-Cap ETF (FXI), the index shown in the chart above. It’s a real-world barometer of the real trade progress between China and the U.S. And unlike the mainstream media, it’s accurate!