As I noted last week, the Fed has officially launched QE 4. Fed officials are adamant not to refer to it as QE in public, but it’s QE nonetheless.

QE 4 is a monetary program through which the Fed will print $60 billion in new money which it will then use to buy U.S. debt (Treasuries) from the big banks.

This comes on top of the Fed offering $75 billion in liquidity via overnight credit windows… as well as $35 billion twice a week through another credit facility.

Put simply, the Fed is now providing between $130 billion and $200 billion-plus in liquidity to the financial system every month.

This is the NUCLEAR-level QE program I predicted was coming in my bestselling book The Everything Bubble: The Endgame For Central Bank Policy back in 2017.

The reason the Fed is doing this, in its simplest rendering, is to weaken the U.S. dollar.

“Wait a minute,” you might be thinking, “the U.S. dollar is nowhere near as high as it’s been in the past. Why does the Fed need to weaken it?”

How to Accurately Read the U.S. Dollar

This is true if we’re talking about the U.S. dollar index, shown below. 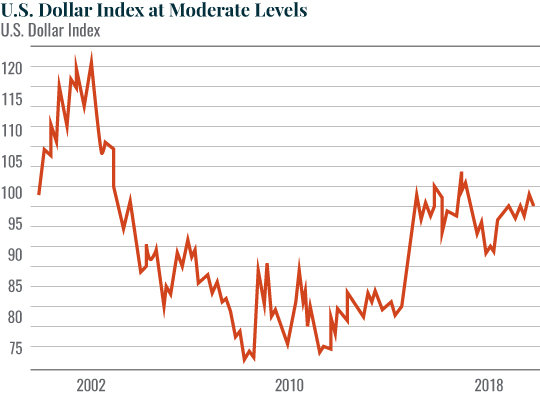 So if Japan accounts for 40% of total trade with the U.S., the Japanese Yen will account for 40% of the basket of currencies used to value the trade-weighted U.S. dollar index.

This is why the Fed is moving to weaken the U.S. dollar. Relative to the U.S.’s major trade partners, the U.S. currency is way too strong.

You see, the U.S. dollar is involved in over 90% of all currency transactions in the world. So whatever happens to the U.S. dollar has an incredible impact on every other currency on the planet.

With that in mind, if you can accurately trade central bank policies like the Fed’s QE 4, you stand to make a literal fortune.

I’ve spent the last eight months developing a proprietary system for trading central bank actions. And since its launch, it has handed traders returns of:

My new system is delivering a small group of readers an 80% win rate! So for the 16 trades we’ve made, we’ve booked profits on 13 of them.

In the trading field, an 80% win rate – with every single winner in the double digits – is UNHEARD OF.

And best of all… this was BEFORE the Fed announced its latest QE scheme.

Head to the Alpha Currency Profits page on the website to learn more.