It took them way to long to do this. And frankly I believe a big reason why they refused to take action before was because they didn’t want to admit that President Trump was right about the U.S. dollar’s strength.

Unfortunately for them, he was. The trade weighted U.S. dollar index is at its highest level in over 20 years. This is extremely damaging to the U.S. economy from a trade perspective.

Which is a big reason why our President was hounding the Fed non-stop for the last year. Love him or hate him President Trump always says what he thinks and is willing to whine, bully and even fight to get it.

Well, he’s about to get it. The Fed has officially lauched a $60 billion month QE 4 program through which the Fed will print $60 billion in new money that it will then use to buy U.S. debt (Treasuries) from the big banks.

This comes on top of the Fed offering $75 billion in liquidity via overnight credit windows… as well as $35 billion twice a week through another credit facility.

Put simply, the Fed is now providing between $130 billion and $200 billion-plus in liquidity to the financial system every month.

All of this is going to drive the U.S. dollar DOWN.

And that’s where the opportunity lies.

You see, the U.S. dollar is involved in over 90% of all currency transactions in the world. So whatever happens to the U.S. dollar has an incredible impact on every other currency on the planet.

You can see this in the below chart. As soon as the U.S. dollar began to weaken dramatically, it had a big impact on both the Yen and the Euro. 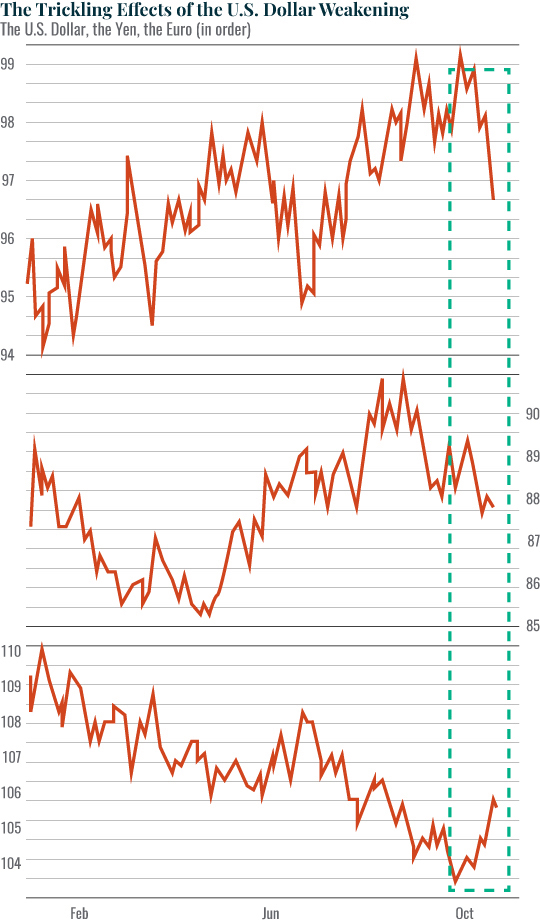 All of this means that we’re entering a period of currency volatility. And unlike stocks, which return only 20% a year during a BLOCKBUSTER year. Those traders who trade currencies can see returns as large as 50% in just two days.

I’ve spent the last eight months developing a proprietary system for trading central bank actions. And since its launch, it has handed traders returns of:

My new system is delivering a small group of readers an 80% win rate! So for the 16 trades we’ve made, we’ve booked profits on 13 of them.

In the trading field, an 80% win rate – with every single winner in the double digits – is UNHEARD OF.

And best of all… this was BEFORE the Fed announced its latest QE scheme.

Head to the Alpha Currency Profits page on the website to learn more.

The momentum is starting to stall…

A detailed look at a Fed intervention…