Over the last week I’ve outlined how the Fed is panicking.

If you’ve missed my articles on this subject, the basic outline is that the Fed is now easing monetary conditions via FOUR policies:

Add it all up, and the Fed is now easing via four monetary policies.

However, the Fed is not the only central bank to be easing monetary conditions. Globally, central banks are flooding the financial system with liquidity.

A Tsunami of Liquidity is Hitting the Markets

The European Central Bank (ECB) has cut rates even deeper into negative territory for the FOURTH time. It will also launch its own QE program in November at which time it will start printing €20 billion every single month. It, like the Fed, will use this new money to buy debt from EU banks.

Elsewhere, the Bank of Japan (BoJ) never actually stopped printing new money. The BoJ has been running a QE program non-stop since 2014. And it recently hinted that it’s ready to cut rates or increase its QE program should such moves be warranted.

And finally, there is the Swiss National Bank (SNB), which prints money to buy stocks outright almost weekly. It’s already printed over $140 billion in new money with which it has bought stock in over 6,000 companies.

Put simply, a TSUNAMI of liquidity is hitting the markets right now. And it’s about to ignite an explosive move higher in the markets.

In fact, the MSCI World ETF (URTH), which tracks global stock markets, just broke out of a massive consolidation phase, shown below. 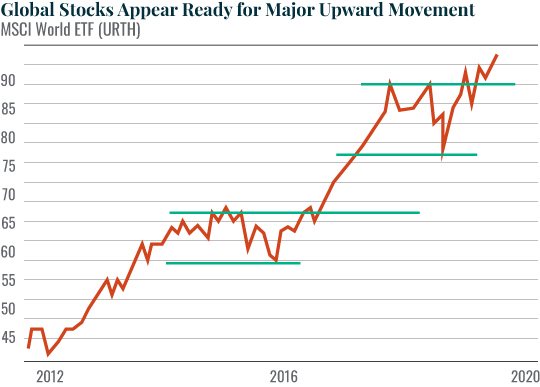 We could very well see a similar move this time around. I’ll tell you how you can play it for massive profits tomorrow.

In the meantime, I was on Cheddar last week discussing the Fed’s actions in great detail. You can watch the full video here.