Ever since central banks began printing money to prop up the financial system in 2008, the big question for investors was whether this experiment in monetary policy would result in inflation or deflation.

Put another way, would all this money printing/intervention cause the financial system to enter an inflationary period – in which risk assets rose to truly astonishing levels as currencies lost their purchasing power…

…Or would it fail miserably resulting in another deflationary collapse – similar to 2008 with defaults, economic collapse, and the U.S. dollar soaring?

We just received a hint that it’s likely to be the former, not the latter.

The Fed’s Money Printing is Finally Leading to Inflation

Let me explain how we know that the Fed’s actions are likely leading to inflation.

Commodities are one of the most inflationary-sensitive asset classes on the planet. And in the last month, they’ve broken out of the biggest falling wedge pattern I’ve seen in a long time. 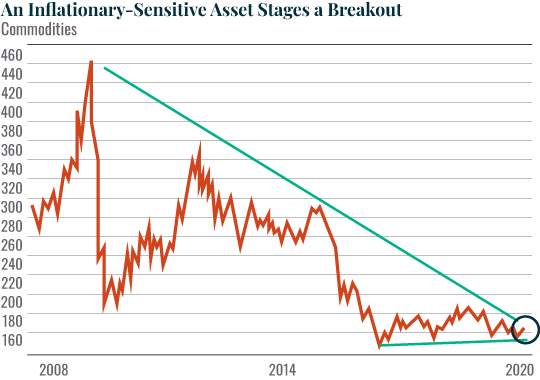 Of course, this pattern was years in the making. And its resolution will take years to complete as well. But the fact that the breakout was to the upside suggests inflation is coming.

The bond market appears to be suggesting the same thing.

As you can see, the Treasury bond market started rising in mid-2018 – meaning it entered an inflationary period. Since that time, it’s rallied aggressively, hitting new highs. 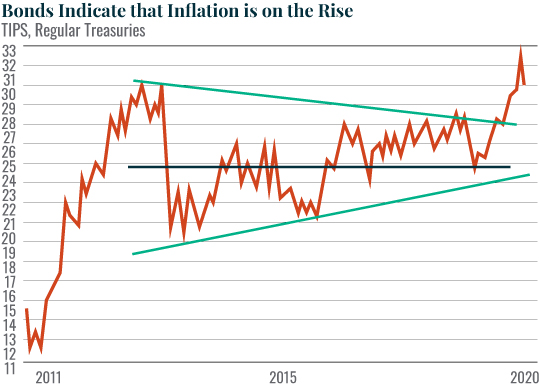 This again suggests that IN-flation, not DE-flation, will be the final outcome for central bank money printing.

The big question now is, as investors, how do we play this?

I’ll detail some investment ideas tomorrow. Until then…