Yesterday, I outlined how both commodities and bonds are suggesting that higher rates of inflation are coming.

Commodities, which are extremely inflation-sensitive, are breaking out of a massive falling wedge formation. This suggests that commodity prices will soon be rising rapidly, which typically indicates inflation is rising. 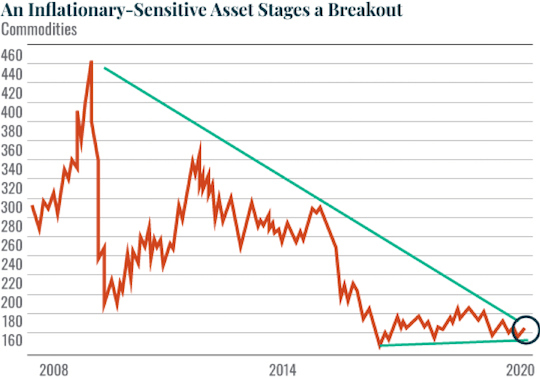 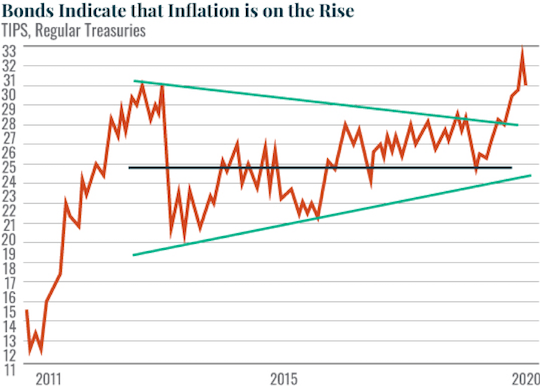 So how does this translate to stocks?

Stocks Are a Temporary Hedge Against Inflation

History shows us that stocks are a great hedge against inflation, at least for a time. The reasons for this are:

However, once inflation seeps fully into the economy, it becomes a big negative for stocks. Reason being, companies are no longer able to offset their higher operating costs by raising prices anymore and as a result of this, corporate profits begin to fall. And that’s when inflation starts to hurt stocks.

You can see this in the performance of the stock market during the 1970s – the last period of higher inflation in the U.S.

In 1971, the Fed, under political pressure from then-President Richard Nixon, began cutting interest rates despite the evidence that the U.S. economy was doing well.

This, combined with Nixon breaking the link between gold and the U.S. dollar in August 1971, allowed inflation to really take hold. And as you can see on the chart below, stocks LOVED it, rising 60% from mid-1970 to 1973. 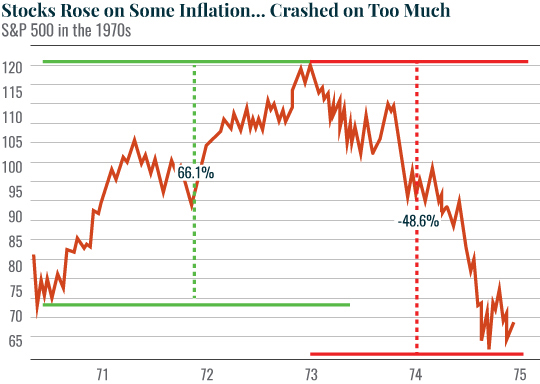 However, at that point inflation was really beginning to get out of control, hitting 11%. The cost of everything was exploding higher and corporate profits took a huge hit. Stocks fell approximately 50% in the 20 months following this.

Here’s how this translates to present day…

Is An Inflation Spike Coming in Stocks?

If higher rates of inflation are coming, then stocks are still early in the game. This ties in well with my running forecast that the Fed is going to drive stocks into a truly insane bubble.

If stocks were to repeat their run of the early ‘70s when inflation first began to accelerate, we could be talking about the S&P 500 approaching 5,000 in the next two years.

It sounds insane, but it’s happened before. And the long-term chart for the S&P 500 is open to a move above 4,000 in the coming months. 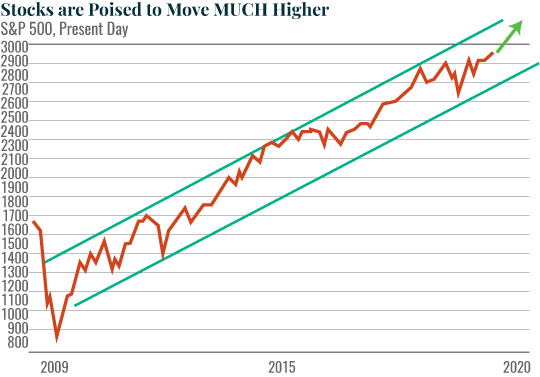 I’ll detail just what will drive this move higher in tomorrow’s article. Until then…

Yesterday I discussed the Deep State attempting an act of economic terrorism against the U.S. And now, the U.S. Treasury market is aware of this plot…