Over the last week, I’ve been building a case that the financial system is lurching towards a period of greater inflation.

So we have commodities, bonds, and stocks suggesting higher inflation is coming.

The only asset class that has yet to confirm the move is currencies.

However, it appears we won’t have to wait much longer for this.

Is the U.S. Dollar About to Break Down in a Big Way?

The U.S. dollar is retesting the lower end of its bullish channel, shown below. 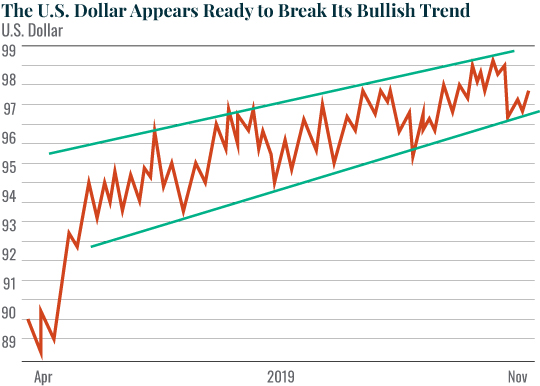 If we DO get a breakdown here, the door opens to the U.S. dollar falling to the mid-‘80s. 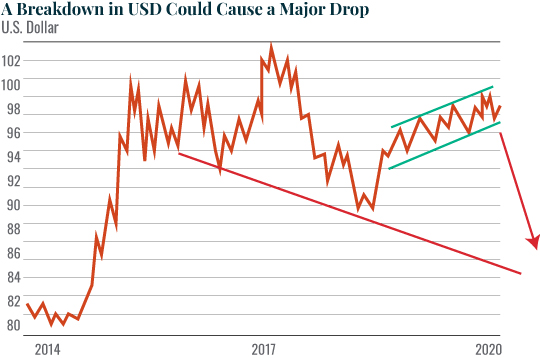 That would be a HECK of a drop in the U.S. dollar, and would confirm that the Fed is pushing a higher inflation/weaker U.S. dollar environment.

This would ignite a MASSIVE move in stocks.

As I noted yesterday, investors are sitting on $3.4 trillion in cash right now.

The entire argument for sitting on cash (which currently earns a little over 2% at best) disappears if inflation spikes higher.

Remember, higher inflation means the U.S. dollar losing value. So that $3.4 trillion in cash would quickly start losing value, eventually forcing investors to move out of the asset class and into something with higher returns.

Stocks are Preparing for a Massive Move Higher

However, with the Fed aggressively easing, stocks will do better than that. Indeed, stocks are already up over 20% this year and the Fed didn’t even start cutting rates until July.

Imagine where stocks would move if the Fed continues to ease… and even $1 trillion of that $3.4 trillion in cash sitting on the sidelines moves into stocks? 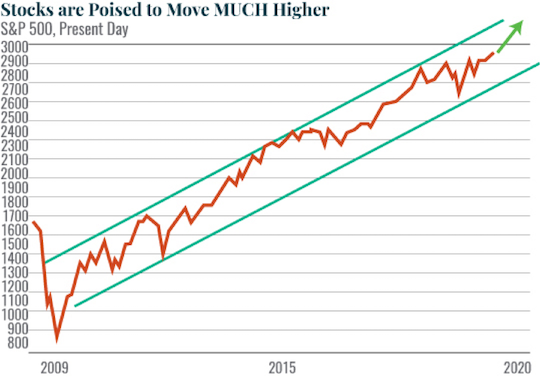 It’s still too early to be certain here, but we are a lot closer to getting confirmation that the Fed is going to unleash higher inflation than we were a month ago.

So what’s the best way to play the coming market melt up?

I recently clued subscribers of my Strategic Impact newsletter in to an incredible investment… that’s already up 4%.

I’ve received a number of emails concerning the trade deal that was announced between the U.S. and China last week. The sad reality is that this isn’t much of a deal… at all.