Yesterday, I suggested that the Fed has decided to unleash inflation as part of President Trump’s master plan to win the 2020 election.

I realize this may sound odd, but bear with me and in a few minutes, you’ll understand.

Aside from when the country is embroiled in an all-encompassing issue like war, Americans historically vote with their pocketbooks. Meaning, voters are most influenced by how well the economy is faring.

Former President Bill Clinton understood this, which is why his 1992 campaign had an internal mantra stating, “the economy, stupid.”

The point of this was to remind Clinton’s staff that the priority needed to be on the economy, specifically how candidate Clinton planned to strengthen the economy. I have little doubt this played a big role in Clinton defeating the Republican incumbent George Bush in 1992.

As a highly successful real estate developer, President Trump understands the influence the economy has on how people act better than most.

Real estate is a highly cyclical business. And when the economy is booming, people go out and buy newer, bigger, better homes. When the economy is weakening, and people have less money, they stay in their current homes and real estate takes a big hit.

Keeping all of this in mind, it is clear President Trump understands that in order to win re-election, he needs the economy to be as strong as possible going into election day in 2020.

And in this context, one of the president’s greatest challenges was getting the U.S. Federal Reserve, or the Fed, to ease monetary conditions.

The Ongoing Battle Between Trump and the Fed

We’ve talked about how aggressive the Fed was during the first three years of President Trump’s first term.

As a brief recap, the Fed raised rates SEVEN times in the first three years of Trump’s presidency. Over the same time period, the Fed also drained some $600 billion from the financial system via its quantitative tightening (QT) program.

Put simply, during the first three years of Trump’s presidency, the Fed was more hawkish than at any point in well over 40 years, possibly ever.

These policies acted as a drag on the economy, particularly when you consider how much debt is floating around the U.S. financial system… debt that would become more expensive with every Fed rate hike.

It is not coincidence that the U.S. economy failed to score the 3% annual growth President Trump promised on the campaign trail.

Just take a look at the below chart comparing the Fed’s rate hikes under the final years of President Obama’s second term to those made during President Trump’s first term. You could easily argue that the Fed was going out of its way to stifle Trump’s economic agenda. 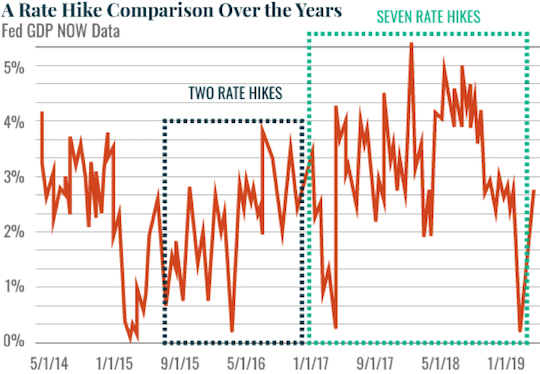 The president tried haranguing the Fed via Twitter and in public appearances for six months from January 2019 until June 2019. When that didn’t prove successful, he started using the trade deal with China to force the Fed’s hand.

It is not coincidence that the president threatened to hit China with greater tariffs the day after the Fed failed to produce rate cuts that were as aggressive as the president desired in July and August.

Those tariff threats increased economic uncertainty in the U.S., which in turn made corporations cautious about increasing their capital expenditures and other expenses that would grow the economy.

And it caught the Fed’s attention in a big way.

Soon after the president threatened to hit China with greater tariffs, the Fed started talking more about “trade uncertainties” and “clouds on the global economic outlook.” This in turn gave the Fed the cover to start easing without appearing overly influenced by the president (the Fed is supposed to be politically independent, at least in appearance).

The end result: The Fed has now cut rates three times and has launched a $60 billion per month QE program – EXACTLY what President Trump needed to ensure the economy would rocket higher, guaranteeing him victory in 2020.

This leaves us as investors with an important question… How do we profit from this?

In fact, I’ve already clued subscribers of my Strategic Impact newsletter in to an incredible investment… that’s already up 4%.

The Four Stocks the Fed Uses to Ignite Rallies

The little known way the Fed manipulates the market higher…