Money & Crisis is devoted to analyzing the financial markets and finding profitable investment opportunities based on what’s happening.

However, there are times in which politics intervenes in these issues. And unfortunately, at these times I have to address political issues because they could dramatically impact the financial markets.

This is one of those times. So please bear with me as I detail the current impeachment frenzy taking place in the media and on Capitol Hill.

Please understand, what follows is not political analysis. I’m not endorsing what’s happening nor am I against it. I’m merely outlining the reality of the situation, and how it’s going to impact the financial markets.

First and foremost, President Donald Trump will not actually be impeached.

The media is attempting to make us worried about this issue, similar to how they covered Russian interference in the 2016 presidential election and a slew of other issues that have proven inaccurate for several years now.

The reality is that all of this frenzy is completely misguided and unnecessary.

Sure, maybe one or two Republicans might play along… but 18? No way on earth. Again, President Donald Trump will not be impeached.

Secondly, if the House of Representatives did push to get an impeachment trial underway in the Senate, it would backfire in a spectacular fashion. A Senate impeachment trial allows both sides to call witnesses and present evidence. Meaning… President Trump and his army of top tier lawyers would be permitted to call witnesses, question them, and present evidence.

Put simply, unlike this current impeachment “inquiry” taking place in the House of Representatives (which isn’t even a legitimate thing in legislative terms), a Senate impeachment trial would be a whole other ballgame.

And it would allow President Trump and his associates to go “scorched earth” in their defense and their efforts to reveal the corruption that took place in the Ukraine.

That would be a nightmare for the Democrats.

And finally, there is something that no one seems to have noticed…

If a Senate impeachment trial took place, it would require ALL Senators to be in D.C.

This would include Senators that are currently out on the campaign trail for the 2020 presidential election – Warren, Sanders, Harris, Booker, Klobuchar, and Bennet. Put another way, all six of those Senators would no longer be able to campaign for weeks if not months.

Again, President Trump will never be impeached. This current impeachment inquiry will go nowhere. And if anything, it’s going to backfire on the Democrats because it requires them using energy, capital, and resources to pursue something that will ultimately prove to be a dead end.

If you don’t believe me, consider what the stock market is saying about this…

Stocks are extremely sensitive to the Trump presidency. Every time news has surfaced that even hinted that President Trump might have to leave office, the stock market has tanked.

Take a look at what the stock market has done since this impeachment inquiry has taken place (green rectangle in the chart below). Does it look like stocks are worried about Trump’s future as president to you? 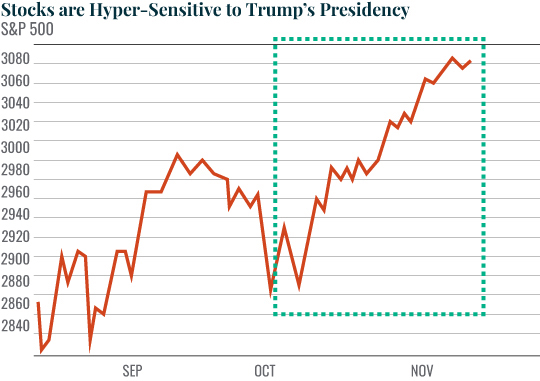