Long-time readers of mine know that a central concept in my trading framework is that we are in what I call the “era of serial bubbles.”

In its basic rendering, the Fed currently has no choice but to continuously create bubbles in various asset classes or risk debt deflation imploding the system.

Debt deflation is when debt begins to rapidly lose its value and needs to be restructured or it defaults. In a system with as much debt as ours, this can quickly become a systemic issue.

If you think I’m being dramatic, consider that the amount of debt deflation that triggered the 2008 Crisis is represented by the little dip in the orange line in the chart below. (The green line represents GDP.) 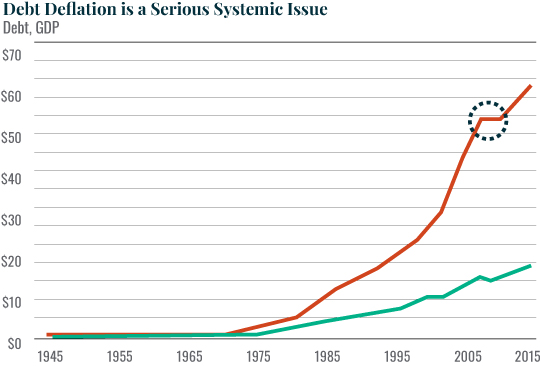 Again, the Fed is terrified of debt deflation, to the point that it will intentionally create asset bubbles in order to inflate the financial system.

Here’s a brief rundown of these bubbles:

In the late ‘90s we had the Tech Bubble – a bubble in technology stocks.

We then had the Housing Bubble in the mid-‘00s.

And today we are in the Everything Bubble – a bubble in sovereign bonds, which are the bedrock of our current financial system. Because the yields of these bonds represent the risk-free rate of return against which all risk assets (stocks, real estate, commodities, etc.) are priced, when they went into a bubble, EVERYTHING followed.

And it has opened the door to the greatest trading environment I’ve seen in my entire life.

Not in stocks or bonds… but in currencies.

The Largest, Most Liquid Markets in the World

Put simply, the currency market, based on volume alone, is 33 times larger than the stock market. This is the largest, most liquid market in the world. And it’s also where the largest, fastest gains can be made.

Because with the right trading strategy, even a SMALL move in currencies can mean MASSIVE gains. 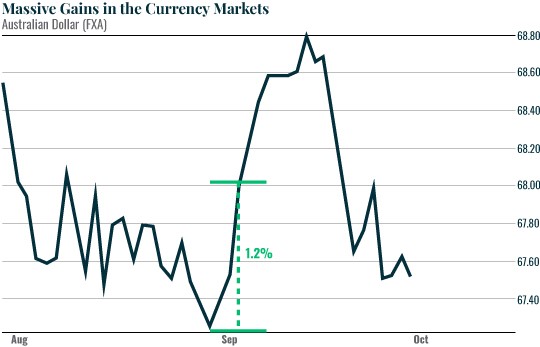