Yesterday I reviewed the performance of our Money & Crisis three-month forecast from August.

As a brief recap, at that time I predicted that:

So all in all, we were right on two-and-a-half out of our three forecasts. Anyone who followed these investment ideas made good money in those three months.

The big question now is… what comes next?

Stock Forecast: A Correction, Then a Run to New All-Time Highs

As I write this, the market is primed for a correction of sorts. Internals are weakening. Stocks are overbought.

And from a technical analysis perspective, the S&P 500 has touched the top line of the bullish channel (blue lines below) that has been in play for much of 2019. 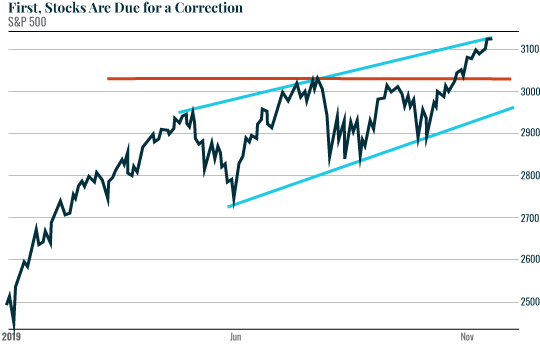 All of this suggests stocks are due for a correction – but I think it will be a minor one. We might fall all the way to critical support at 3,020 (orange line above) but given the momentum to the upside, it could be shallower than that.

In chart form, I think things will look like the following: 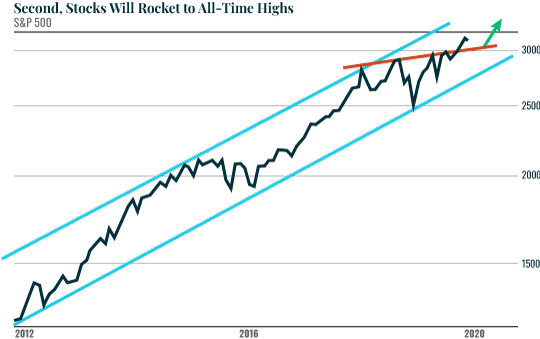 The driving forces for this stock market melt up will be:

That last point is key.

The fact is that despite its assertions to the contrary, the Fed has begun easing monetary conditions aggressively. Provided the economy holds up or at least treads water, the Fed’s liquidity pumps will drive stocks through the roof.

And all of this is part of what I call “Trump’s Master Plan.”

Trump Has Taken Over the Fed, But No One Knows It Yet