Yesterday, I outlined my forecast for the stock market going forward.

That forecast is that stocks are due for a correction, but then we will see a run to new all-time highs.

I realize this sounds ridiculous right now. But consider the following:

Regarding #1, the last time the Fed was providing this much liquidity to the financial system was when Lehman Brothers failed in September 2008. At that time unemployment was already over 6%, the stock market had lost more than 20% from its previous peak and was entering the worst crisis in 80 years, and the U.S. economy was six months into a deep recession.

Today, the Fed is providing this much liquidity when unemployment is 3.6%, the stock market is at all-time highs, and the U.S. economy is growing by 2-3%.

This is the kind of environment in which the stock market can reach truly insane levels.

Regarding #2, corporate buybacks remain the largest source of buying power in the stock market today. And with corporations scheduled to buy $675 billion worth of their own stock next year, that’s a LOT of buying power boosting stocks higher.

And unlike real investors who are picky about prices they pay, this $675 billion in buying power is indiscriminant and will occur on a SE schedule.

Regarding #3, this current bull market might be the most hated bull market in history. Despite stocks over 20% this year to new all-time highs, investors are currently sitting on over $3.4 trillion in cash.

That’s $3.4 trillion in cash, sitting in a money market account, earning less than 2%, while stocks have exploded 20% higher.

At some point, these investors are going to realize they’re missing out, and they’re going to start buying stocks. If even 10% of this cash ($340 billion) moves into stocks next year, we’re talking about over $1 trillion in buying power hitting the markets due to real investors and corporate buybacks ($340 billion +$675 billion= $1.0+ trillion).

That’s over $1 trillion in buying power hitting stocks in a single year… at a time which the economy is growing, unemployment is below 4%, and stocks are already at all-time highs.

Again, this is the kind of environment that can lead to truly insane stock levels. Even during the Tech Bubble in the late ‘90s, this kind of buying power wasn’t happening.

Simply put, I believe stocks are due for a mega melt up. And the chart tells me it’s a real possibility. The S&P 500 just broke above resistance within its mega bullish channel.

You can see this in the chart below. 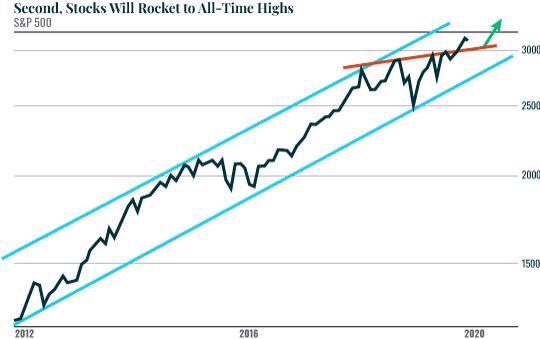 However, there’s another fourth reason why I believe the market is about to explode higher.

A detailed look at a Fed intervention…