It’s no secret that central banks are actively intervening in the financial markets.

Since the 2008 crisis, collectively, global central banks have:

Back in 2003, had you even suggested these policies were possible, you would have been labeled a conspiracy theorist.

Today, not only do we know that all of the above items are true, but they are accepted as a normal everyday occurrence!

As crazy as this is, what’s crazier is that these policies DO NOT represent the largest, most significant monetary interventions by central banks.

You see, the above monetary policies (cutting rates, QE, buying stocks) focus almost exclusively on the stock and bond markets.

The REAL interventions, the ones that central banks focus on more than anything else involve the currency markets.

The Largest, Most Liquid Markets in the World Are Also the Most Important

Put simply, the currency market, based on volume alone, is 33 times larger than the stock market. This is the largest, most liquid market in the world.

It’s also the most important one.

If a country’s stock market falls 10% over the course of a month, it makes headlines, but the country’s economy and trade operations continue on as usual.

However, if a country’s currency loses 10% of its value over the course of a month, it has a profound impact on its economy and trade operations.

Bottom-line: maintaining a stable and secure currency is the single most important thing for a country’s central bank. Which is why they intervene on a nearly weekly basis to insure their currencies remain relatively stable.

And this opens the door to truly extraordinary profit opportunities.

Anyone who has been trading the markets for a while has realized that the more a central bank intervenes in a given market, the greater the profit potential that market has.

Between 2008 and today, central banks have intervened in the stock markets more than at any point in history. As a result of this, stocks are in the longest bull market in history, having more than tripled their returns. This can be seen in the chart below. 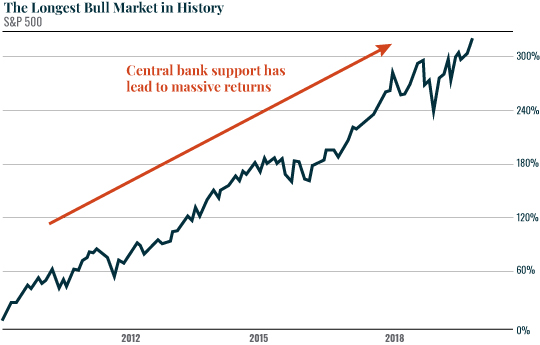 Bear in mind, the interventions central banks have made to support stocks are nowhere NEAR as significant as the ones they make to support their currencies.

As a result of this, with the right trading system you can double your money with currencies in a week or two… rather than having to wait several years for stocks to produce similar results.

I’ve spent the last eight months developing a proprietary system for trading central bank actions with a specific focus on the Fed. And since its launch, it has handed traders returns of:

My new system is delivering a small group of readers an ~80% win rate! So for the 19 trades we’ve made, we’ve booked profits on 15 of them.

In the trading field, an 80% win rate – with every single winner in the double, if not TRIPLE digits – is UNHEARD OF.

And best of all… this was BEFORE the Fed got more aggressive in the currency markets.

And I want you to join us at a big discount.

First, click here and I’ll show you how my breakthrough system works.

The Fed is trapped and needs to crush the U.S. dollar. As such, it’s “inflating” the U.S.’s debt away…