There is no recession.

The investment herd bought heavily into the “a recession is about to hit” narrative earlier this year.

They did this based on:

Regarding #1, it’s now clear that the large dip in economic activity is rebounding. Both U.S. manufacturing and service sector purchasing managers indexes (PMIs) surprised to the upside in October. We also saw a sharp rebound in consumer confidence and existing home sales.

Bottom-line: the data is rebounding.

Regarding #2, countless pundits noted that the Treasury yield curve inverted earlier this year. For those unfamiliar with this idea, a yield curve inversion is where short-term Treasuries yield more than long-term Treasuries. It’s happened before most recessions in the last 50 years. And so the investment herd assumed that this time it was the same.

Central banks effectively cornered the bond market from 2008-2017 with over 600 interest rate cuts and $14 trillion in QE. Never before in history have we seen a coordinated attempt to control the bond market like this. And it has rendered historical comparisons weak if not useless.

Put simply, any analysis of the bond market that doesn’t account for the fact that it is artificial is not worth the paper it’s written on. For this reason alone, the yield curve inversion is no longer a guaranteed indicator of a looming recession.

Regarding #3, I don’t have anything to add. Politics is a toxic topic and frankly if you hate a political figure so much that you hope millions of Americans will lose their jobs so that he or she will lose an election, you need professional help. And if you’re investing based on this kind of thinking, you’re going broke.

Add it all up and the “a recession is coming” crowd is dead wrong.

Stocks are Prepared to Rally

Stocks have known this for some time, which is why they’ve broken out to the upside of their consolidation range. 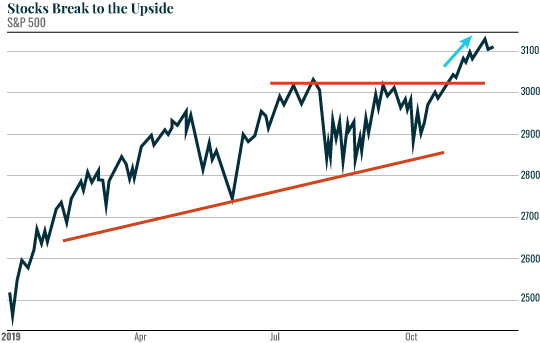 Mind you, this happened at a time when investors were sitting on $3.4 trillion in cash.

So what happens when hedge funds are desperate to improve their 2019 performance to halt redemptions… and individual investors who went “into cash” based on recession forecasts both realize that they were wrong?

Again, the stock market has already signaled this is coming. 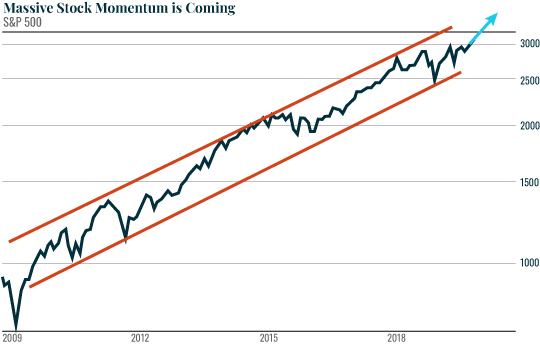 And going back to the president for a moment…

I fully believe President Trump has recently employed a strategy that will guarantee him winning the 2020 election in a landslide.

President Trump needs a unifying issue… something so dramatic that the majority of Americans would be willing to “sign off” on his move to take over the Fed. And nothing unifies the U.S. like war…