So much for “temporary.”

When the Fed first began easing monetary policy again in July 2019, it did so via what it called a “mid-cycle adjustment.”

What the Fed meant by this was that the rate cut was NOT the start of an aggressive easing cycle. Rather, the Fed was “one and done” with rate cuts.

The Fed adopted a similar attitude when it first launched its repo operations in September. (For simplicity’s sake, repo operations occur when banks do not have the required levels of liquidty. They can “park” some of their less liquid assets with the Fed in exchange for cash, thereby increasing their liquidity.)

When the Fed first launched its repo operations in September, the Fed claimed it would be providing $75 billion in overnight liquidity for a few days.

Again, the Fed implied that this easing would be temporary.

Fast forward to today, and the Fed has cut rates two additional times… increased its overnight repo program to $120 billion… launched a term repo program that has since increased from $30 billion to $45 billion… AND launched a monthly QE program of $60 billion.

The message here is clear: When it comes to interventions/monetary easing, there is no such thing as “temporary.”

Put another way, the Fed can NEVER abandon its interventions in the markets. Instead, it will be forced to engage in larger and larger interventions more frequently.

The Fed are Now “Permanent Interveners”

I first predicted this would prove to be the case back in 2017 in my bestselling book The Everything Bubble: the Endgame for Central Bank Policy.

At that time, it was plain as day to me that the Fed was trapped, despite its claims to the contrary. The fact is that the financial system is so massively leveraged (meaning there is too much borrowed money) that the Fed can NEVER allow monetary policy to normalize to historic levels (interest rates at 5% and the Fed balance sheet at approx. $1 trillion).

In graphic terms, the Fed is concerned about the chart below, with total debt securities in dark blue and GDP in orange.

THIS is the real bubble the Fed is attempting to maintain at all costs. And by the way, the numbers on the right represent TRILLIONS of U.S. dollars. 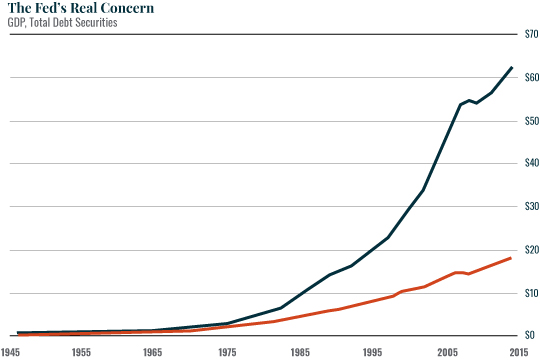 The Fed has no choice but to permanently intervene to maintain the financial system. Failing to do so would mean a crisis that would make 2008 look like a picnic.

It is now getting to the point that the Fed is intervening on a daily basis. And for this reason, I fully believe we are in the LAST bull market of our lifetimes.

See for yourself below…

The Last Bull Market of Our Lifetimes

As you can see on the chart below, there have been THREE bull markets in the last 100 years (identified with green arrows): 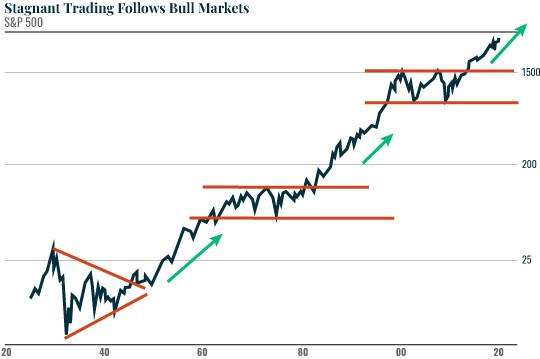 It is important to note that EVERY bull market has ended with a bear market/consolidation period during which stocks went nowhere for DECADES (minimum 15 years).

THIS is why the Fed is intervening so aggressively in the markets. And it’s why you NEED to take advantage of this bull market to ensure you can retire rich with your financial future intact.

And the good news is that I believe we’re going to see an extraordinary bull market run in stocks in the coming months.

2020 is an election year. Perhaps you heard…

No sitting president has lost his re-election bid unless the economy or the stock market were in trouble.

Ford, Carter, and Hoover were all sitting presidents during incredible financial upheaval. None of them made a second term.

And he and the Fed are making choices right now that I believe will drive the market to NOSEBLEED levels in the next 12 months.

I know, trade wars with China wage on, impeachment hearings continue in the nation’s capital, and no fewer than 9,300 retail stores (Payless, Dressbarn, Family Dollar, and more) will close by the end of 2019, according to Business Insider.

But hear this: none of that matters.

I’ve been following this story all year. In fact, the roots of the story date back to October of 2018. The forces at play here trump all of that. And the result will be twofold:

I reveal the full story, including how to profit, in Strategic Impact. Head to that page on the website to learn more.