In late November, I predicted a correction was coming for stocks. (Here’s the original writeup.)

And that correction hit earlier this week.

If you’ll recall, I warned that the correction would likely prove shallow. And it did. The S&P 500 fell to only 3,070 or so before bouncing hard.

The door is now open to the next leg higher. But it might take a few weeks before this move begins. The last two times the S&P 500 corrected we had consolidation periods of four weeks and two weeks respectively (dark blue squares in the chart below). 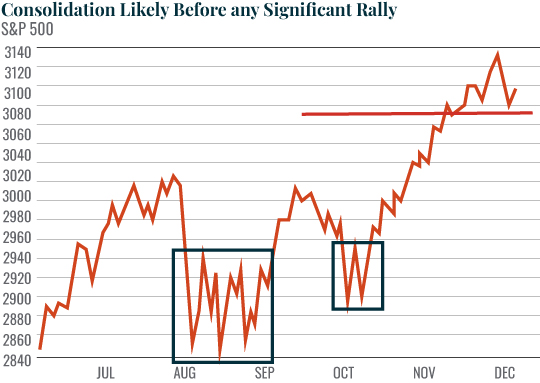 So while I fully expect stocks will stage a run to new highs in early 2020, the markets might use up most of December consolidating before this move begins.

In the big picture, stocks remain in a relatively young bull market.

While most of the media claim stocks entered a bull market in 2009, the reality is that stocks were in a bear market during which they went NOWHERE from 1997-2013.

Put another way, this bull market only just began in 2013. 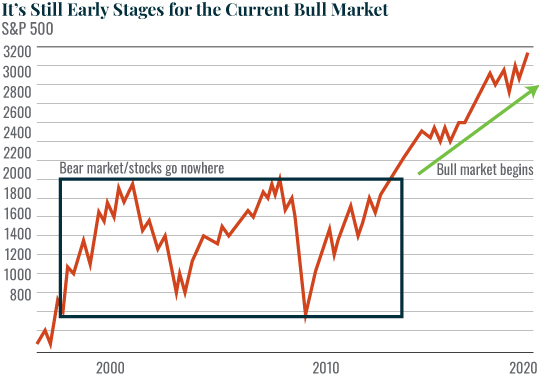 I fully expect this new bull market to take stocks to truly NOSEBLEED levels in the coming months, which is why I have subscribers of my Strategic Impact newsletter invested in several key trades designed to more than TRIPLE the stock market’s performance.

As I write this, all of those key positions are UP. And I fully expect them to produce triple- if not quadruple-digit gains in the coming months.

During the live call, my publisher Doug Hill will be grilling me on all the big issues — including President Trump’s impact on the economy… a “behind the scenes” look at the Fed… the U.S.-China trade war… and more.

And perhaps most exciting, I’ll be answering reader questions, too!

I sent a note to my Strategic Impact readers encouraging them to ask me about anything – the trade war, gold’s recent performance, the Fed’s new QE program, I could go on.

I plan to answer as many questions during today’s call as possible.

But as I was writing that email, I realized that I’d like to hear questions from all of my readers, including you.

Click here to let me know what your biggest questions and concerns are right now.

I’ll answer them in future Money & Crisis updates. I may even feature a few of these questions during today’s live call.

Now, if you’re not a Strategic Impact subscriber yet, there’s still time to get on board before today’s event.

And if you don’t know about Strategic Impact, you’ll find a quick rundown below…

Strategic Impact is a monthly newsletter that provides high impact research to individual investors. I cover everything from the economy to geopolitics to the financial markets to bring my readers the very best analysis I have to offer.

I also provide specific stock recommendations based on my research.

And I’m proud to say that since its launch, five of our eight positions have made money. And I’m actually even more bullish on the current losing positions than I was when I first recommended them!

Think of Strategic Impact as the next step up for serious investors.

And of course, ongoing access to quarterly strategy calls.

I encourage you to activate a trial subscription to Strategic Impact.

I hope that you will be joining us this afternoon. Simply call 1-844-368-2923 for access or head to the Strategic Impact page on the website to sign up.

The world is running out of U.S. dollars. This is the single biggest issue facing the global financial system today…

Ultimately, debt is a very complicated, nuanced thing. But here’s one universal truth about debt: It doesn’t matter… until it does.