Yet virtually NO ONE is profiting from it.

Consider this… Over the last 11 years, a period of time in which stocks have more than TRIPLED, investors have pulled money out of stocks SEVEN of those years.

Yes, seven out of 11 years. In the last three years they’ve pulled over $1 TRILLION alone, shown below. 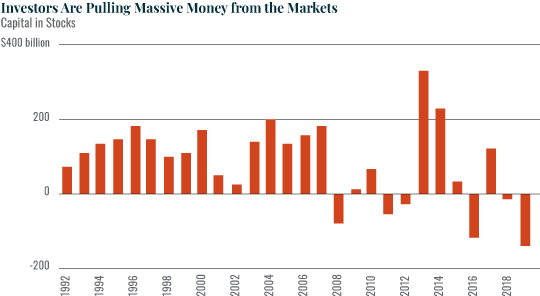 As if that wasn’t insane enough, consider that in 2019 investors have pulled MORE money out of stocks than they did in 2008.

Let me repeat that…

During 2019 – a year in which the stock market rose over 25% – investors have pulled MORE money out of stocks than they did during 2008 – the WORST FINANCIAL CRISIS OF ALL TIME!

As I write this, investors are sitting on $3.4 trillion in cash. That’s roughly equal to the GPD of Germany.

All of this means that this is the single most hated bull market in history.

That said, even though investors are sitting on massive amounts of cash, the stock market continues to rise. Meaning someone is still buying in.

So if investors aren’t the ones buying stocks… who is?

The Fed and Corporate Buybacks are Fueling the Bull Market

The Fed is now providing roughly $60 billion in liquidity to the financial system every single month.

This money is then being funneled into the stock market in the form of margin debt and other leverage that Wall Street sells to hedge funds and other large investment firms.

On top of this, we have corporations buying $480 billion worth of their stock this year and planning to buy another $470 billion in 2020.

So between the Fed and corporate buybacks, we’re talking about over $1.1 trillion in “buying power” hitting the markets every single year.

That’s a LOT of buying power.

I’ll detail how this will happen tomorrow. Until then…

A tsunami of liquidity is also about to hit the global markets.

If you know how to analyze central bank activities accurately, you can trade currencies in a way that can produce truly massive returns.