Over the last week, I’ve outlined how the Federal Reserve (or “the Fed”) is now forced to intervene in the financial markets on a regular basis. And yesterday, I suggested that the Fed is actually buying stocks directly.

Technically, the Fed is not supposed to buy stocks or stock futures. And they certainly do not include those assets on their balance sheet listings, which are published every week.

However, we know from Fed meeting minutes that the Fed does indeed own positions in the markets that it does not publish.

Case in point: Back in October 2012, then-Fed Governor Jerome Powell (now-Fed Chair), explained what happens when the Fed decides to sell its investment positions during a discussion:

“So when it is time for us to sell, or even to stop buying, the response could be quite strong; there is every reason to expect a strong response. So there are a couple of ways to look at it. It is about $1.2 trillion in sales; you take 60 months, you get about $20 billion a month. That is a very doable thing, it sounds like, in a market where the norm by the middle of next year is $80 billion a month. Another way to look at it, though, is that it’s not so much the sale, the duration; it’s also unloading our short volatility position.” [Emphasis my own.]

Here, Powell is stating that the Fed has a “short volatility” position ― meaning the Fed is either shorting the Volatility Index (VIX) via futures, or options.

It looked as though it was going to be a bloodbath when suddenly at 10 AM, AMZN’s stock stopped on a dime and reversed sharply higher. 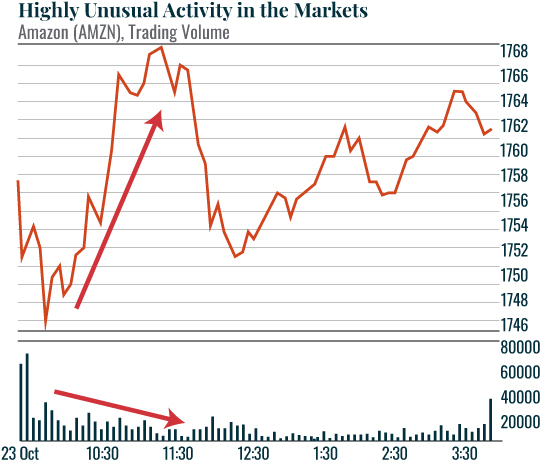 The Fed is behind this sudden change in stock direction.

Here’s how I know…

Let’s break down each of these below…

REAL buyers (especially hedge funds) DON’T want to move the market. So they enter buy orders in large blocks over time to prevent this. Compare that to what happened on Oct. 23, 2019, in AMZN when shares went absolutely vertical.

REAL buyers DON’T randomly enter massive buy orders based on a particular time of the day. I’ve done extensive back-testing and throughout the last three years anytime stocks opened in the red in a big way, they almost always stopped on a dime and reversed higher at 9:50-10 AM.

Again, this is not normal.

We know an intervention occurred in the AMZN example above because trading volume collapsed soon after if happened. (See the lower half of the chart above.)

This is why I refer to Fed interventions as “ghost money” in the markets. It isn’t real money coming from real investors who are actually investing in stocks.

This is just one example. I have dozens of others. And my research all points to one thing:

The Fed is intervening in the stock market.

Now the big question is: How do we profit from this?

I’ll detail this trading strategy in the coming days. But for now, know this…

This is the single most incredible discovery of my career. Stay tuned.