Yesterday, I detailed how the Fed has admitted it will be easing monetary conditions permanently going forward.

The terms were laid out in Fed speak, but to paraphrase, the Fed stated the following:

Of these three statements, the most important one is #3.

I’ve been reading Fed statements for over a decade. And I’m a world-renowned authority on Fed policy, having written a bestselling book that predicted everything the Fed is doing years ago.

So I can tell you that what the Fed means when it states it won’t raise rates again until it sees a “persistent” rise in inflation is that it is DONE raising rates for years… if not FOREVER.

If you don’t believe me, consider that former Fed Chairman Ben Bernanke admitted the exact same thing during a private lunch with hedge funds back in 2014.

The big question is: What does this mean for the markets?

Keep scrolling for the answer…

We Are Entering a Weak U.S. Dollar Era

Indeed, the greenback (the U.S. dollar) has broken its two-year uptrend. 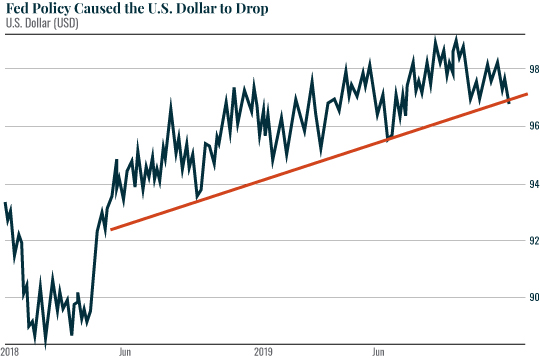 And given that it accounts for over 90% of all currency transactions, this opens the door to EXTRAORDINARY profits if you know how to trade situations like these.

The writing is on the wall… We are about to enter the greatest period of currency destruction in history.

The Fed, the European Central Bank, the Bank of England, the Bank of Japan… all of them are firing up the printing presses to devalue their currencies.

And my readers will be using this to generate LITERAL fortunes…

You see, I knew this was coming. Which is why I’ve spent over nine months developing a proprietary trading system to profit from the next currency wars.

Indeed, we just DOUBLED our money on a trade we opened just yesterday!

On Thursday, President Trump slammed China with another round of tariffs…