The markets are telling us that the impeachment process will go nowhere.

Very early into his presidency, Donald Trump branded the stock market’s returns as illustrating the success of his policies. Treasury Secretary Steve Mnuchin even went so far as to state that the White House views the stock market as a “report card.”

This has proven correct. Throughout the Mueller investigation, whenever a story surfaced suggesting that President Trump was in trouble, the stock market would nose-dive at least for a day or two.

Note however, that with each sell-off the market put in a higher low. Also note that since early October, the market has been going straight up – almost to new highs on a weekly basis. 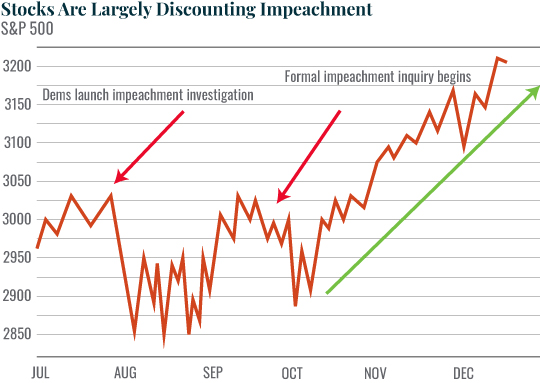 The market is telling us that the impeachment process will go nowhere. If anything, it’s guaranteeing that Joe Biden will be the Democrats’ nominee… which guarantees a landslide victory for President Trump in 2020.

How to Profit from Election 2020

The impeachment process will now move to a Senate trial. That will require all Senators to attend. This means both Bernie Sanders and Elizabeth Warren will have to be in D.C. and not on the campaign trail.

That leaves Joe Biden as a front-runner for the Democrat nominee.

However, Mr. Biden’s odds of success are so low that even President Barack Obama – the man who chose Joe Biden as his vice president and who worked with Mr. Biden for eight years – has failed to publicly endorse him.

So again, the market is telling us that this impeachment process poses no threat to President Trump. If anything, the market is now beginning to hint at a second term for the Trump Presidency.