To see this, however, you need to look outside the official data, which is so heavily gimmicked that it borders on fiction.

Instead, take a look at corporate sales.

While there are literally dozens of ways through which companies can boost their earnings, sales are all but impossible to fake. Either money came in the door or not.

As such, they’re a great read on the economy – particularly the power of the U.S. consumer, which makes up 70% of GDP.

With that in mind, consider that the average year-over-year sales growth for a basket of economically sensitive companies shows growth is near 5%. Not 2% or 3%… 5%. 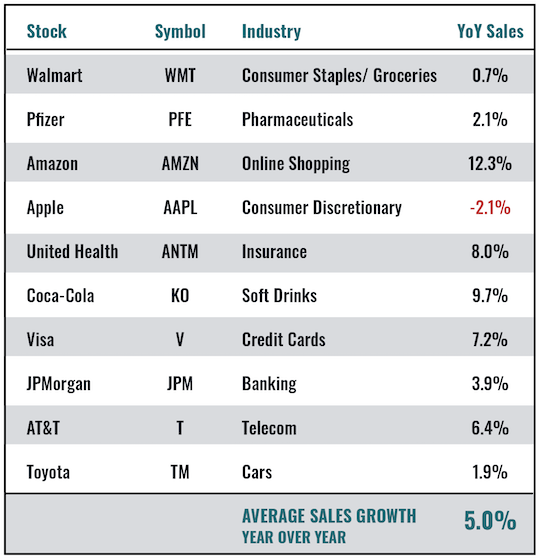 Interestingly, the slowest growth was in Walmart, while the highest sales growth was in consumer discretionary items like Amazon and Coke. Typically, we see sales growth rise dramatically at Walmart when the economy slows as more and more consumers become price sensitive.

With that in mind, the above table suggests that despite all the negative claims by the media, the American consumer is going strong. He and she are shopping for higher priced, discretionary items.

Now take a look at this table comparing quarter-over-quarter sales growth for the last three quarters for those same companies.

Looking at this, it appears the U.S. economy did indeed slow in the first half of 2019 – but is now rapidly rebounding. Quarter-over-quarter, we’re seeing growth above 3%. 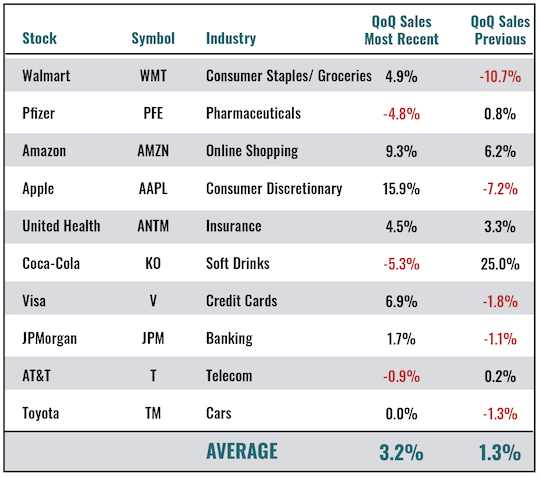 How to Profit from Election 2020

Once again, the Trump administration has succeeded in generating major economic growth above and beyond the official data. And by the look of things with corporate sales today, we’re about to experience another economic boom – NOT a bust.

This suggests President Trump winning a second term in a landslide.

Are Stocks on a “Sugar High?”

I’m watching credit to make sure this is the real deal… and not a sugar high that will lead to a nasty crash.