For the markets, the end of 2019 was about one thing and one thing only:

The U.S. dollar breaking down.

The U.S. dollar has been in a bull market since mid-2018, when the Fed began to accelerate the pace of its rate hikes and quantitative tightening (QT) program.

That bull market is now ending. The greenback has broken its bull market trendline (orange line) as well as critical support (green line). 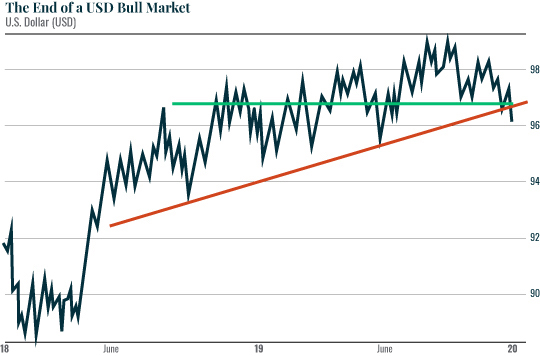 So… why is this important?

The Door is Now Open to MASSIVE Returns

Put simply, the U.S. dollar is THE monetary lubricant that makes the global financial system function.

In this context, when the U.S. dollar begins to strengthen, it creates stress in the system.

Similarly, when the U.S. dollar begins to weaken, it eases stress in the system.

And when the U.S. dollar breaks down in a big way like it did at the end of 2019, it means the Fed is signaling that it wants to ease stress in a BIG way.

The door is now opening to one of the greatest investment opportunities of a lifetime – NOT in the stock or bond markets (although the weakening of the U.S. dollar will benefit those markets as well).

No… the BIG money will be made in the currency markets.

And my readers will be using it to generate LITERAL fortunes…

Huge Opportunity in the Currency Markets

You see, I knew this was coming. Which is why I spent most of 2019 developing a proprietary trading system to profit from the big breakdown in the U.S. dollar.

Even better, every single winner was either a double-digit or TRIPLE-digit winner.