As I write this Friday morning, stocks are down and oil is up. But what’s incredible is just how contained both moves are.

Consider that stocks are down only 1% and oil is up only 4% – on announcements the U.S. killed Iran’s second most powerful person.

To put this into perspective, oil initially rose 20% on announcement that one of Saudi Arabia’s oil facilities was hit by a drone strike in September. Granted, an oil facility is more important to the price of oil than a military leader, but you get the overall idea here.

Simply put: Stocks and oil are telling us that this is NOT the start of WWIII.

As I write this, the S&P 500 has corrected to test the lower trend line of its bullish channel (orange lines below). If we hold here, I expect the market to rebound relatively quickly with a run to 3,275 or higher within a month. 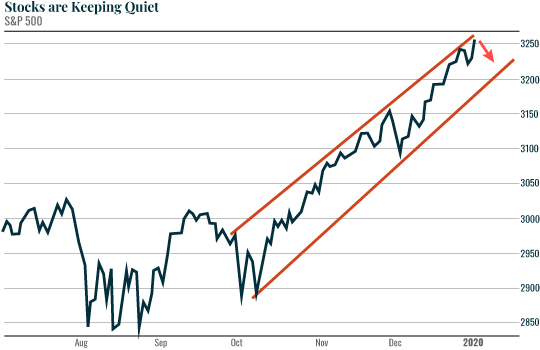 Oil’s price has spiked to $63 and change. This is within the confines of the rising wedge formation that oil has been carving out since October. 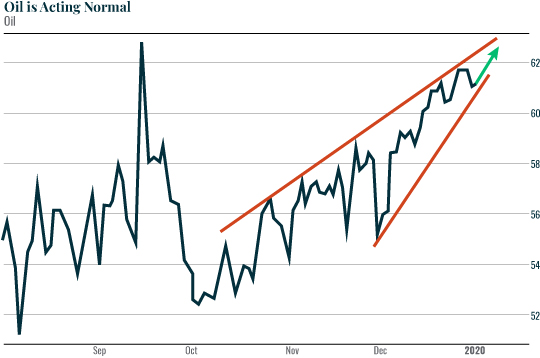 Again, the point is that the markets are telling us this is NOT the start of something major. Of course, things can change. But right now, both stocks and oil do not believe that a physical war is coming.

However, while there won’t be a physical war, there is a monetary war currently underway.

That is, rather than bullets and bombs, it’s going to be fought with central banks and currencies.

The Next War Will Be Monetary, Not Physical

In the last 12 months, every major central bank on the planet is either preparing or has already announced a major new stimulus program.

As a reminder, QE is the program through which a central bank prints new money and then uses it to buy debt from banks/financial institutions, in turn hoping to boost the financial system.

The U.S. Federal Reserve has announced a $60 billion per month QE program, cut rates three times, and launched multiple repo programs to the point that its balance sheet is now expanding at $100 billion per month.

The Bank of Japan is preparing to launch even more stimulus, despite the fact it has already bought 80% of Japan’s ETFs. Yes, 80%. And it is a top-10 shareholder in over 50% of the companies that trade on the Japanese stock market.

Put simply, central banks have announced that they are going to devalue their currencies in a BIG way. We’re talking currency confetti.

And for those who know how to trade this, the door is now open to LITERAL fortunes.

You see, I knew this was coming. Which is why I spent most of 2019 developing a proprietary trading system to profit from central bank monetary aggression.

Even better, every single winner was either a double-digit or TRIPLE-digit winner.

There is NO sign anywhere from the individuals in charge of Fed policy that the Fed is about to ease aggressively.