Yesterday I made an astonishing claim…

Central banks are directly intervening in the stock market.

And I’m not talking about manipulating the markets indirectly by cutting interest rates to make money cheaper… nor am I talking about providing extra liquidity to Wall Street via quantitative easing (QE) programs.

I’m talking about central banks literally buying stocks outright – hundreds of BILLIONS of dollars’ worth of interventions being made every year.

Consider that the Swiss National Bank literally prints money and buys stocks in the U.S. stock markets. (You can see a recent SEC filing from November 2019 in which it lists the companies it owns here.)

The Bank of Japan also prints money and buys stocks outright. As of March 2019, it owned 80% of Japan’s ETFs. Yes, 80%. And it is a top-10 shareholder in over 50% of the companies that trade on the Japanese stock market.

These are not small positions, either. Between the Swiss National Bank and the Bank of Japan alone, we’re talking about over $300 BILLION in stock positions.

If you think that’s crazy, buckle up.

Because based on the market action I’ve been monitoring over the last few years, I believe the U.S. Federal Reserve is doing this as well. And not just here and there – but on a weekly basis.

For years now, I’ve noted that anytime stocks began to break down, “someone” has suddenly intervened to stop the market from cratering.

That someone is the Fed.

Take a look at yesterday’s market action to see what I’m talking about.

Stocks opened in a sea of red based on increased tensions between the U.S. and Iran. Then, suddenly, stocks went absolutely vertical around 10AM. 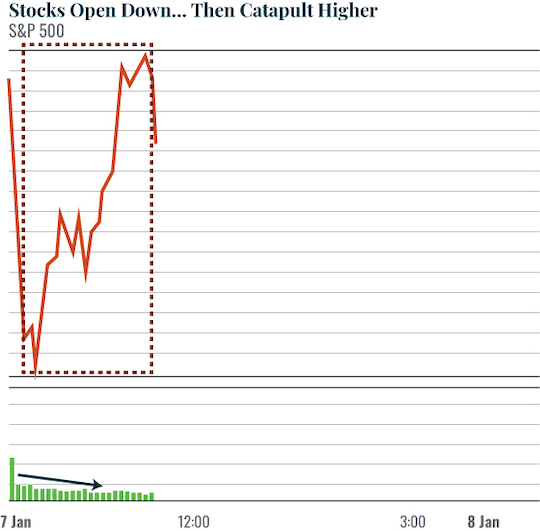 How do we know it’s a Fed intervention and not real buyers moving stocks higher?

Let’s break down each of these indicators now.

First and foremost, large financial institutions don’t place buy orders that move the markets. Rather when they go to buy stocks, they have their orders spread out in blocks to ensure the market DOESN’T move and price gets away from them.

Compare that to what happened in the chart above at 10AM. Stocks went absolutely vertical! Whoever placed the buy order that triggered this, wanted the market to rip higher.

Which brings me to the second point…

I’ve noticed time and again that these kinds of large indiscriminate moves occur at 10AM on days when the market opens in the red. This again points to an intervention.

Real investors don’t arbitrarily place large orders at particular times of the day. Rather they look to enter a trade based on where the market is trading, not when.

Add it all up and you’ve got a clear intervention being made in the market – by a large indiscriminate buyer of stocks who wants to ramp the markets higher on days when stocks are in danger of breaking down.

Who else could this be but the Fed?

Alright. We now know the Fed is involved in manipulating the stock market on a near daily basis.

Tomorrow I’ll dive in even further – revealing the four stocks that the Fed focuses on MOST.

As you’ll soon see, there’s a way to use this knowledge to your advantage to lock in regular and massive profits.

More on this tomorrow…