As my research has shown in great detail over the last week, the Fed is now intervening in the market to prop up stocks.

Yesterday was a great example of a Fed intervention according to my indicators. The markets opened down and for a brief moment, it looked as though selling pressure would be strong enough to force a significant drop.

Then suddenly, “Ghost Money,” as I call it, appeared in the market right around 9:50AM to intervene. Sure enough, it ramped certain pivotal stocks higher.

We know these are interventions because:

Take a look at what Microsoft (MSFT) did yesterday.

This a textbook example of Ghost Money at work. MSFT shares were falling early in the morning. Then suddenly on NO NEWS, the stock ripped higher right around 9:50AM.

Take note also that trading volume actually FELL as MSFT shares ripped higher (shown in the lower half of the chart). 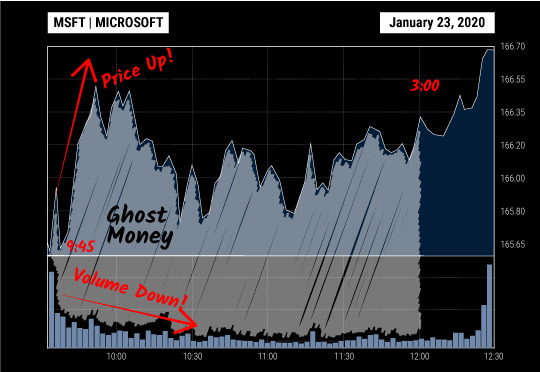 Even more suspicious, as soon as MSFT was ramped to a level that stopped the stock from breaking down, shares completely flatlined.

This was a clear indication that the ramp job was caused by Ghost Money – NOT real buyers. If this move had been driven by real buyers with real money, MSFT shares would have held up.

Indeed, we know that real buyers didn’t step into the market until the last 30 minutes of the day by looking at the right side of the chart above.

As you can see, MSFT shares ramped again in the last 30 minutes AND trading volume rose. That’s a great example of REAL buyers entering the market. Now compare that move to the one caused by Ghost Money at 9:50AM.

So… why do I believe the Fed is using Ghost Money on stocks like Microsoft?

Keep reading for the answer…

Ghost Money focuses on four key stocks: Microsoft (MSFT), Apple (AAPL), Amazon (AMZN), and Facebook (FB). Why? Together, these companies account for over 10% of the stock market’s weighting.

If the Fed can get these big four companies to rally, the automated trading programs that make up 90% of all trading activity in the stock market will take over, buying everything else to drive the market higher.

And since the Fed likes to focus on these stocks, so do I. Which brings me to my next point…

While 99.9% of investors didn’t notice what happened to MSFT shares yesterday morning, my Ghost Money Trader research service is designed to identify these interventions the moment they hit.

Ghost Money Trader is designed to do two things…

So you can get ahead of major market moves BEFORE they happen.

Before I shared this system with the public and decided to just focus on the four key stocks, it produced gains of:

Just this week, early subscribers saw the chance to lock in two double-digit winners that they held for less than three hours.

And the actual trading of these positions took less than FIVE minutes to execute.

Plus, my system has had a near 100% win-rate right now since its launch.

That’s why I’m so excited to reveal this to you today.

Just remember, if you’d like to join my new research service… you NEED to act fast.

Because our early enrollment for this newsletter is just about full. Once these spots are taken, they’re gone for good.

To claim your spot…

The Fed is Playing “Chicken” with the Markets Again…