“It doesn’t matter why, Graham. Knowing the reason why you’re sick won’t change how you feel.”

I’ve been feeling under the weather for the last few days. And I’m been driving my wife crazy trying to figure out the cause.

Was it because I didn’t dress warmly enough during that long walk on Wednesday? Should I have skipped that heavy weightlifting session on Friday when I already had a cough? Maybe I caught something at the supermarket?

I’ve always been obsessed with knowing how things work. To me, knowing why something happens is as important as knowing what is happening.

But my wife has a solid point… sometimes knowing why something has happened doesn’t change anything about the situation. And figuring out how I got sick isn’t going to actually make me feel any better. Rest and fluids will.

I was thinking about this as I looked at the markets this morning. As I write this, the world is a sea of red. So far as I can tell, there are three issues at play here:

However, as is the case with my current illness, knowing the reason stocks are down isn’t important. Instead, we need to focus on what to do in this situation.

The No. 1 Driver of Stock Prices is About to Make a Major Change

As I write this, the S&P 500 has corrected down to 3,240 or so. This represents the first major line of support for the markets, shown below. 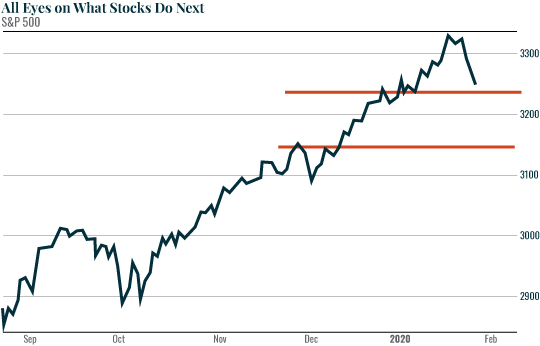 What happens next matters a great deal. If we HOLD here, then stocks will soon ROAR higher in an explosive move.

Now… what could possibly override the concerns I outlined above?

With few exceptions, liquidity is the single most important factor for the financial markets. And interestingly enough, the Fed stopped providing as much liquidity to the markets in the last two weeks… after providing more than $100 billion per month for three months straight.

You can see this in the Fed’s balance sheet below. Notice that the Fed balance sheet expanded aggressively since September 2019 as the Fed pumped hundreds of billions of dollars into the financial system. Also notice that for whatever reason, the Fed had halted this in the last few weeks.

If the Fed begins to aggressively provide liquidity to the financial system again, I believe the stock market will explode higher.

And I fully believe the Fed will be doing this.

Because the Fed HAS to keep the stock market elevated to keep the economy chugging along. At this point, so much of Americans’ wealth is tied to stocks that a sharp drop in stock prices would hurt consumer spending.

For this reason, the Fed has become obsessed with maintaining the bull market in stocks. Indeed, I fully believe the Fed is now intervening to prop up the market on a weekly basis.

So you can get ahead of major market moves BEFORE they happen.

Before I shared this system with the public and decided to just focus on the four key stocks, it produced gains of:

Just last week, early subscribers saw the chance to lock in two double-digit winners that they held for less than three hours.

And the actual trading of these positions took less than FIVE minutes to execute.

Plus, my system has had a near 100% win-rate right now since its launch.

That’s why I’m so excited to reveal this to you today.

Just remember, if you’d like to join my new research service… you NEED to act fast.

Because our early enrollment for this newsletter is just about full. Once these spots are taken, they’re gone for good.

To claim your spot…

I sent this market update to Strategic Impact readers earlier today. Since I believe it’s valuable for all of my readers to know this information, we’re also sending it to Money & Crisis readers now.

The days of fast big gains are OVER for stock investors. So where do you need to look if you’re interested in double- or triple-digit gains that can be made in a week or so? I’ll tell you.