I have a confession to make.

I DON’T trust the Fed. At all.

On the one hand, as a market strategist, I have to pay attention to the Fed and its actions. The Fed has a massive impact on how the markets move.

However, as an individual and an American, I don’t trust the Fed or its officials at all. The Fed’s track record has proven that it is a highly political organization that prefers globalism. And that means sabotaging the U.S. economy in order to benefit other nations and entities.

Let me give you some examples.

The Fed is supposed to be apolitical… but the Obama years proved this was a total lie.

First and foremost, the Fed kept rates at zero for seven years, despite the fact the economy was in a recovery. There was no sound, fundamental reason for this. Either the economy was in a depression or rates should have already been rising as early as 2011. You can’t have it both ways.

However, this was not the most egregious example of Fed political meddling.

A mere two months before the 2012 presidential election, the Fed launched quantitative easing (QE) 3, a new monetary program designed to boost the economy and the stock market.

At the time the Fed did this, the data didn’t warrant it in any way shape or form. What was happening however, was that Barack Obama was slipping in the polls and it was beginning to look as if Mitt Romney was going to win the election.

Put simply, the Fed’s QE 3 program was a clear case of election interference, run by the Fed, to help the Obama administration win re-election in 2012.

Then, in 2016, Donald Trump wins the presidential election in the greatest political upset of all time. Trump immediately begins implementing a pro-America policy, backing out of the Obama administration’s globalist treaties and cutting regulations to unleash the private sector.

So what does the Fed do?

It raises rates EIGHT times in the span of three years. And it also begins draining $60 billion in liquidity from the financial system every single month.

Put simply, the Fed went from engaging in its loosest, most accommodative policy of all time, to its most aggressive monetary tightening in history… starting on the date Donald Trump won the 2016 election.

It’s possible this was coincidence. But former Fed Vice Chair Stanley Fischer admitted in private that the Fed raised rates at least once with the intention of hurting the U.S. economy as a political statement on President Trump.

So… why do I bring all of this up?

The media is blaming the recent stock market sell-off on coronavirus… but in reality, every single year the flu infects and kills more people that the coronavirus and stocks don’t even blink.

So what really triggered the sell-off?

Starting in mid-December 2019, the Fed began pulling the plug on the markets.

As of last week, the Fed’s balance sheet was actually DOWN for the year, shown below. And this is at a time when the Fed is engaged in a $60 billion per month QE program. 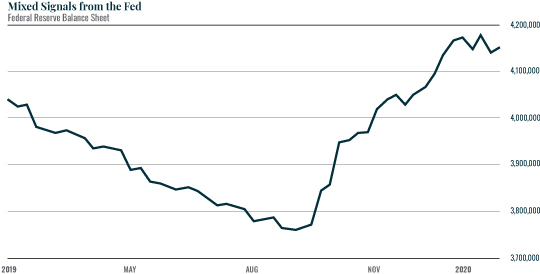 Put simply, according to official Fed policy, its balance sheet should be growing by at least $60 billion per month. And instead it’s going DOWN.

And this is happening during the impeachment trial of President Trump.

What are the odds of that?

So… my question is: Is the Fed about to attempt to crash the markets to intentionally hurt the Trump administration?

New members to my most explosive project to date just scored a quick 26% gain – in the time it took to drink a cup of coffee!