I catch myself before I finish what I was about to say. I am in public after all.

I’m waiting in line at the DMV. I’ve been here for over two hours already. And judging from the number they just called (55), it’ll likely be another hour (I’m 82) before I get out of here.

And the worst part of this whole mess?

I did this to myself.

I knew I had to get my license renewed months ago. But between running a business, making time for family, hitting the gym, and a million other things, I kept putting it off.

By the time I finally got around to dealing with the license situation, I could no longer renew it online. And thus, I am now wasting an entire afternoon at the DMV.

And every moment that I’m sitting here, I remember, “You did this to yourself. Had you done the right thing months ago, this wouldn’t be happening.”

I’m sure President Trump is thinking something similar these days.

It’s difficult enough to be president, particularly when you’re an outsider trying to navigate the D.C. Swamp. However, President Trump has made this process even more difficult by hiring the wrong people time and again.

Whether it’s the weak-willed and naïve Jeff Sessions as attorney general, the pro-globalist National Security Advisor H.R. McMaster, or the GOP stooge Reince Priebus as chief of staff, President Trump’s first term has consistently featured him hiring people who hate both him and his agendas.

As a result of this, the president has found himself dealing with one mess after another.

Without Jeff Sessions, there would have been no Mueller investigation.

Without H.R. McMaster, there would have been no attempted coup by Obama holdovers at the National Security Council.

And without Reince Priebus, there would have been no damaging leaks.

However, no single hire has been as damaging to the president’s agenda as that of Jerome Powell as Fed chair…

Under Powell’s leadership, the Fed engaged in clear economic sabotage, hiking interest rates EIGHT times in the span of three years. To put this into perspective, prior to Trump winning the presidency in November 2016, the Fed hiked rates ONCE in SEVEN YEARS.

But that’s not all. Under Powell’s leadership, the Fed also rewarded President Trump by draining $400 billion in liquidity from the financial system. And this was after ADDING $3.5 TRILLLION in liquidity during the Obama years!

Taken together, it is clear that Jerome Powell and his cohorts at the Fed intentionally sabotaged the U.S. economy to hurt President Trump’s economic agenda. Had the president chosen someone else as Fed chair, he would not have had such a difficult time during his first term.

And judging by what’s happening today, the Fed isn’t finished.

Starting in August 2019, the Fed began expanding its balance sheet by $100 billion per month. The Fed did this after the president harangued the Fed virtually non-stop for all of 2019.

However, suddenly and without warning, the Fed has stopped printing money.

And suddenly it has stopped. 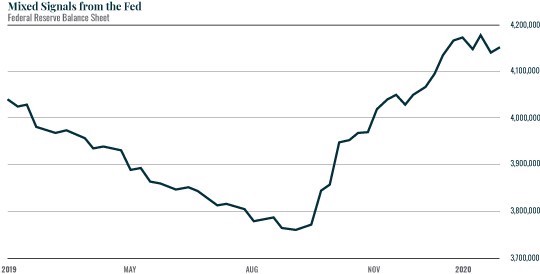 What is going on here? The Fed is supposedly engaged in a $60 billion per month QE program. And yet its balance sheet has started shrinking.

Is the Fed trying to crash the markets?

It sounds ludicrous, until you consider that the Fed has made it clear that it hates President Trump. Former Fed Vice Chair Stanley Fischer has admitted that the Fed was actually raising interest rates to intentionally damage the economy back in 2018.

So… is the Fed gearing up for another act of economic sabotage?

This year is an election year. Historically, the only times a president has failed to win a second term was when the economy and stock market collapsed

Is the Fed trying to engineer this by sabotaging the stock market “behind the scenes”?

Former head of the NY Fed Bill Dudley openly called for the Fed to hurt the economy to stop President Trump’s chance of winning a second term in office just a few months ago.

This is an EXTREMELY dangerous situation and one that needs to be monitored closely.

Of course, if the Fed do decide to lock horns with the president, we know one thing for sure…

Trump is more than happy to fire those who cross him.

And Trump has already made it very clear to Powell that if he doesn’t play ball, he’s not afraid to call him out.

In fact, Trump’s being calling out plenty already on Twitter.

But with the election getting closer and closer, I expect we’ll see Trump turn up the heat.

As I’ve explained in this special presentation, Powell and the Fed are really the only thing standing between him and victory this year.

Take a look here to see why I’m backing Trump to win.