One of my favorite boxers was Miguel Cotto.

Cotto, now retired, was a brawler puncher from Puerto Rico with a wicked left hook. Though he was naturally left-handed, he fought in a traditional stance, with his left hand in the front.

As a result of this, when he got on the inside of his opponent’s guard he could unload a powerful left hook to the body that had the force of his naturally dominant arm.

The effect was devastating. If you’ve ever been punched in the gut, imagine what it would feel like if the person had aimed for your liver instead of your stomach. Now imagine how it would feel if it was from your opponent’s strong arm.

What I admire most about Cotto was that he overcame tremendous adversity in his career. He won his first 32 fights before losing in an extremely controversial loss to Mexican brawler Antonio Margarito.

The fight was brutal, with Cotto eventually taking a knee. Meaning he couldn’t fight anymore. And afterwards, Cotto spent several days in the hospital.

Here’s where the story gets especially interesting. It then became apparent that Margarito had used loaded gloves. What this means is that Margarito’s coach had put plaster on his hand wrappings. As a result of this, when the plaster became solid (likely around round six of the fight), Margarito’s hands were like literal rocks.

Many fighters would have been crushed mentally and psychologically by a loss like this. Cotto came back, recovered, and would avenge the loss in decisive fashion against Margarito before continuing on to become the first ever Puerto Rican boxer to win world titles in FOUR weight classes.

What a tremendous story! And it actually reminds me of the American steel industry in the U.S. I’ll explain…

In the Ring: President Trump vs. the Fed

When President Trump won the 2016 presidential election, he launched the trade war against China and cut regulations. Steel caught a major bid, and like the first part of Miguel Cotto’s career, looked unstoppable.

And then the Fed hit the steel industry with “loaded gloves.”

Because of years of offshoring and regulatory hurdles before Trump took office, many steel companies were required to issue debt to stay in business during those rough years. So they now have high debt loads.

So when the Fed began raising interest rates in 2018, it made things difficult for steel. And what initially looked like a great comeback story turned into a bloodbath, with many steel companies losing considerable value from 2018-2019. 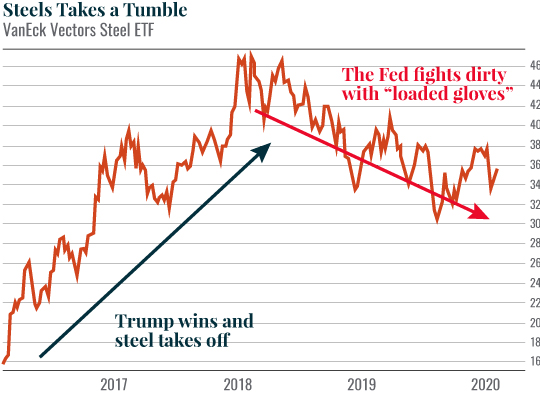 We now know that the Fed was fighting “dirty” – raising interest rates to intentionally hurt the economy and punish President Trump.

Trump caught the Fed in the act and has since forced it to reverse its policies and begin easing again.

And steel, like the great Champion Miguel Cotto, is now looking to get its revenge.

Take a look at the chart below. As you can see, the steel industry has broken its two-year downtrend. It’s also bounced hard off support and is now ready to begin a major bull market. 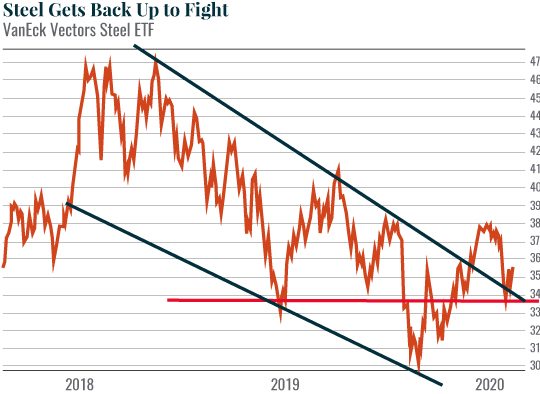 Now, I’ve already recommended a steel company to readers of my Strategic Impact newsletter. And based on what I’m seeing today, I’m looking into other plays to profit as I believe Trump wins the 2020 presidential election in a landslide.

In the meantime, though, if you’d like to learn what I’m recommending and why I’m 100% convinced that Trump will win the election with a landslide…

You should read this.

Look, I originally put my neck on the line and made this call at the end of last year. Since then, everything has been playing out as I predicted.

That’s even DESPITE Trump being impeached!

But as I explain in this special briefing, the truth of this year’s election is very simple…

If the economy is doing well, Trump will win.

And therefore, Trump will stop at nothing to make sure our economy is firing on all cylinders in time for his second coronation.

What’s most important is how you prepare for this. And in the special presentation linked below, I explain how I can help you do that.

President Trump realizes that World War III is about to start. And this time, the weapons won’t be bullets or bombs. They’ll be currencies and debt.

The doom-and-gloom crowd are getting taken to the cleaners…

We Are Now Approaching the “Lehman” Moment… PREPARE NOW!