Of course, Fed Chair Jerome Powell didn’t actually say the words “Graham Summers was right.” But he might as well have done so.

Back in 2017, when I published my bestselling book The Everything Bubble, I predicted that the Fed would never be able to normalize policy.

[Editor’s Note: The Everything Bubble is available to all of my subscribers for free as part of a trial subscription to my research service Strategic Impact. Click here for details.]

Instead, I predicted that the Fed would be forced to engage in ever larger monetary easing. My actual prediction was that the Fed would introduce quantitative easing (QE) programs of $160+ billion at the first sign of major trouble.

Here’s the actual quote from page 176 of my book:

At that time I wrote this, all of Wall Street and every major Fed official went on record claiming that the Fed would have no difficulty in normalizing monetary policy. Soon after, the Fed began shrinking its balance sheet via a quantitative tightening (QT) program, while also raising interest rates at a pace of three to four hikes per year.

Fast forward to today and the Fed is already back with a QE program of $60 billion per month, though the Fed is claiming this isn’t really QE (it is). And the Fed is doing this at a time when the U.S. economy is growing at over 3% per year.

Of course, $60 billion is nowhere near $160 billion. But then came Fed Chair Jerome Powell’s testimony to Congress yesterday…

During his testimony, Chair Powell stated that cutting interest rates won’t work anymore and that the Fed will need to “aggressively” implement QE and other items during the next downturn.

Remember, the Fed is already employing a $60 billion per month QE program right now. So when Fed Chair Powell says the Fed will need to “aggressively” use QE during a downturn, he’s talking about truly MASSIVE amounts of QE.

And by the way, at the time my prediction was laughed at and called insane.

So why is the Fed doing all of this?

EASE NOW or you’re all fired.

A Victory for Trump (and Stocks)

The Fed claims to be apolitical, but we all know this is a load of BS. The Fed did everything it could to help the Obama administration by keeping interest rates at zero and printing over $3 trillion in new money.

Then President Trump won the 2016 presidential election and the Fed suddenly decided it was time to shrink its balance sheet by $600 billion per year while also raising interest rates seven times.

The president caught them in the act and called Fed Chair Jerome Powell and his No. 2 to the White House for a “private dinner.” This was something we covered in Money & Crisis when it happened in 2019.

Ever since then, the Fed has been working to get back in President Trump’s good graces. As a result, we’ve now got the Fed easing aggressively while the economy is already growing at 3% per year.

This is GUARANTEEING a landslide victory for President Trump in 2020.

Reason being, the Trump administration has successfully “branded” the stock market. As such, stocks are closely aligned with the president’s odds of re-election in 2020.

And right now, stocks are telling us they’re all-in on a Trump reelection.

If you do not believe me, take a look at the stock market – the single greatest discounting mechanism on the planet.

With that in mind, what does the below chart tell you about the state of the U.S. economy? More importantly, what is the stock market telling us about what’s coming down the pike for the U.S.? 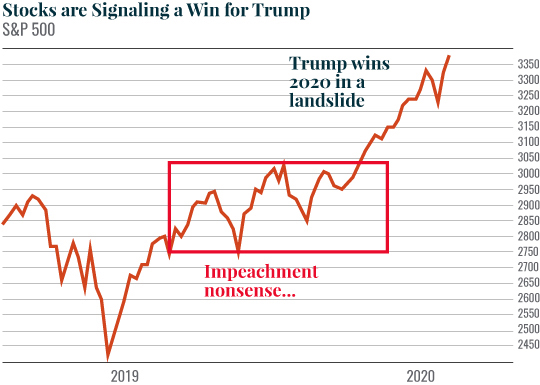 This recent breakout to new highs is telling us Trump wins 2020 in a landslide… and that this time there will be few obstacles to his economic agenda.

Look, I originally put my neck on the line and made this call at the end of last year. Since then, everything has been playing out as I predicted.

That’s even DESPITE Trump being impeached!

But as I explain in this special briefing, the truth of this year’s election is very simple…

If the economy is doing well, Trump will win.

And therefore, Trump will stop at nothing to make sure our economy is firing on all cylinders in time for his second coronation.

What’s most important is how you prepare for this. And in the special presentation linked below and above, I explain how I can show you how to do that.

President Trump needs a unifying issue… something so dramatic that the majority of Americans would be willing to “sign off” on his move to take over the Fed. And nothing unifies the U.S. like war…

I sent this market update to Strategic Impact readers earlier today. Since I believe it’s valuable for all of my readers to know this information, we’re also sending it to Money & Crisis readers now.