“I don’t care what you want to do, Graham. This is my business and we’re going to go with my idea.”

I’m a hot shot analyst in my mid-20s. I’m making six figures a year and have just spent the last year visiting Dubai, Singapore, and Switzerland researching overseas investments for a new product my firm would soon launch.

Suffice to say, I thought I was hot stuff.

And I’m about to get a major lesson in how the business world works.

My boss and I are having a major disagreement on which investment we should recommend to clients for the first investment pick. I want to go with a Brazilian steel company that owns its own iron mines (greatly reducing its operating costs). My boss wants me to recommend a real estate trust based in Vienna as a back-door play on Russia’s real estate boom.

What followed was an intense five-minute debate that ended with the above quote. And that’s when I learned: in business, it doesn’t matter how smart you are or how compelling your arguments sound. At the end of the day, you do what the boss wants.

I was reminded of this experience last week when I noticed that the Fed’s balance sheet exploded upwards by $16 BILLION in a single week.

The chair of the Federal Reserve, as well as most of its board, are picked by the president of the United States. And while the Fed claims to be apolitical, we all know that the president is ultimately the Fed’s boss.

History is replete with examples of Fed chairs kowtowing to various president’s agendas, regardless of their differences of opinion.

The Fed is Back to Printing Money

Up until last week, the Fed’s balance sheet, which serves as a measure for how much liquidity the Fed is providing to Wall Street, was actually DOWN for 2020. And it had effectively flat-lined since December 2019. 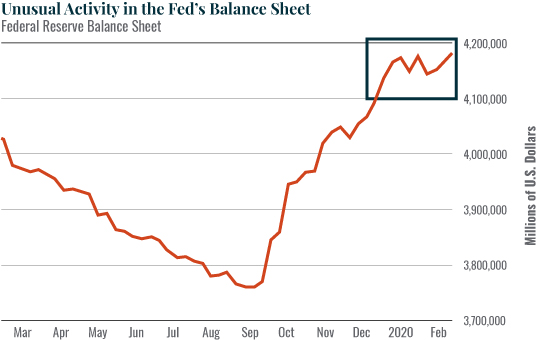 This was unusual considering the Fed is currently supposed to be supplying $60 billion in liquidity to the financial system every month as part of its quantitative easing (QE) program. Technically, the Fed’s balance sheet should be rising rapidly – not flat lining.

We know from previous Fed statements that the Fed has had major disagreements with President Trump on Fed policy. And we also know that President Trump “invited” Fed Chair Powell and his No. 2 to an unscheduled dinner at the White House around this time last year.

Up until that point, the Fed had shrunken its balance sheet by $400 billion and was raising interest rates aggressively. But after that dinner, the Fed stopped BOTH policies rather quickly and began easing monetary conditions.

This is why I believe President Trump called the Fed a few weeks ago and reminded them just who’s in charge. Because suddenly, the Fed balance sheet is back to expanding at a rapid clip.

Not only that, but according to my research, the Fed looks to also be involved in manipulating the stock market higher whenever stocks come in danger of breaking down…

We Have the Opportunity to Make a Fortune

They do it by intervening in the four largest stocks in the market: Facebook, Amazon, Apple, and Microsoft.

These stocks make up 11% of the stock market.

If you can make them soar, the rest of the market will follow the leaders.

Basically, the Fed has figured out that they don’t need to prop up the entire market to boost prices.

It just has to boost these four stocks. And based off my research, that’s precisely what I believe it does.

My research reveals that the Fed regularly pours big money into these four stocks when market weakness rears its head – typically around 30 minutes into the trading day.

When it does, it creates a very distinct pattern that I call “ghost money.”

And I’ve figured out a brand-new strategy that lets you get ahead of this massive market activity.

And it gives you the opportunity to pull consistent money from the stock market, week after week.

My brand-new system has a 100%-win rate since its launch in January… including a stunning 64% gain in as little as 30 minutes.

The fact is, I’ve never seen another strategy that gives you the chance to pull huge, consistent gains from the market this quickly.

If you’d like the full details on how I think the Fed is manipulating the market… and join the select group of folks who’ve already decided to cash in on this new 100% win-rate strategy through my research service, please click here.

The bond market is no longer a safe predictor of recessions…