Last week, I wrote to you about losing money in an article about boxing legend Floyd Mayweather, Jr. You can find that article here.

Mayweather is arguably the greatest defensive boxer of the last 30 years – possibly of all time. His defensive talent was so great that often times he would make his opponents miss three or four out of every five punches.

When you consider that a professional boxer won’t throw a punch unless he is within striking distance, you realize the true level of Mayweather’s talent. He was making fighters miss despite standing right in front of them.

However, even Mayweather took punishment in fights.

Even if you can make your opponent miss you four out of every five times, you’re still going to get hit at least 100 times in a boxing match.

The same is true for losses in investing.

The Importance of Disciplined Investing

No investor – no matter how talented – can avoid losses completely. Warren Buffett, George Soros, Stanley Druckenmiller, Peter Lynch… all of them have been wrong MANY times and lost hundreds of millions of dollars in the process.

Put simply, in investing, losses are a fact of life.

I wanted to remind everyone of this today because the markets are a sea of red.

As I write this, the futures indexes are down over 2% across the board. And we are all going to be experiencing a LOT of losses this morning.

The important thing is how you handle this.

An amateur investor would let his or her emotions get the better of them and start panicking. And he or she will lose money – even more than they need to.

A successful investor, on the other hand, will use his or her discipline. And that means looking at charts to see what the markets are telling them.

The Markets are Telling Us to Remain Bullish

First and foremost, let’s take a look at market breadth below, something the Advance-Decline Index (NYAD) tracks. Reason being, breadth typically leads price in the markets.

Breadth had been warning we could see a drop for a week or so. As I write this, breadth is in an expanding formation (green lines) that suggests we could see the S&P 500 drop to 3,250 before finding much support. 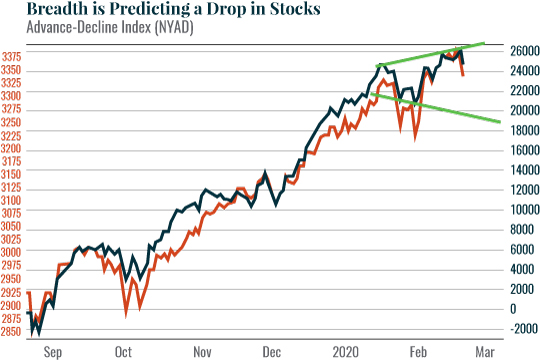 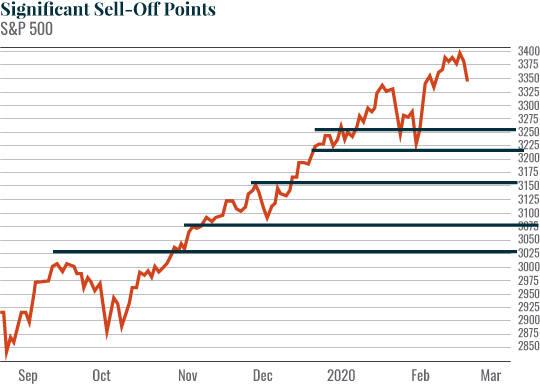 Personally, I do not believe the S&P 500 will break below 3,220. The reason for this is that the recent sell-off has given the Fed to perfect excuse to intervene aggressively in the markets. 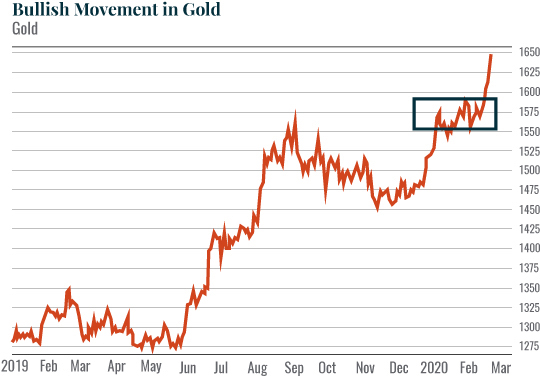 Taken together, I continue to see stocks in a major bull market induced by the U.S.’s economic strength and the Fed’s easing.

Corrections are a part of investing, as are losses. And the market is telling me that this correction is a BUYING opportunity, not the start of a bear market.

Slightly Choppy with a Chance of Breakout

Range-bound stocks may be getting ready to make a move

Why is the Fed Printing So Much Money?

$200 billion in the last month? The Fed is panicked… here’s why.

Profiting from the Hidden Force Driving the Markets

Can you time massive movements in the markets?