The Fed is Playing “Chicken” with the Markets Again…

The Fed is once again playing “chicken” with the markets.

For 30+ years, the Fed has attempted to pretend it doesn’t care about stocks. Time and again, when the markets start to collapse the Fed pretends it doesn’t care, only to then flip around and intervene.

What’s particularly strange about the Fed’s current silence is the fact that it was the Fed that caused the markets to melt up over the last 14 months via verbal interventions and monetary programs.

Throughout the last 14 months, the Fed has talked about introducing nuclear quantitative easing (QE), negative interest rates, and even buying stocks outright during the next downturn.

Well, the next downturn is here and suddenly for some reason, the Fed isn’t saying anything. And stocks are imploding, erasing six months’ gains in six days. 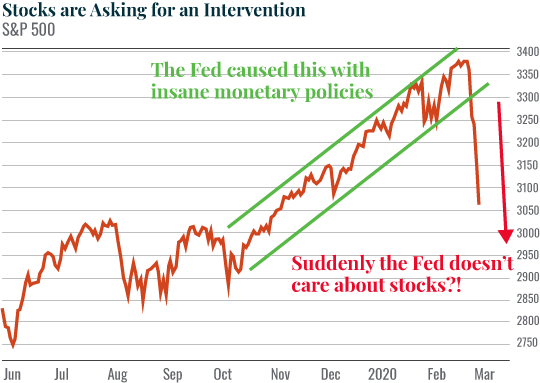 Again, the Fed is trying to play “chicken” with the markets. And I believe the market is about to call the Fed’s bluff.

Prop Up the Markets… Or Else

The reason for this is simple… in a financial system as leveraged as that of the U.S. today, even a whiff of deflation is enough to panic the Fed into stepping in to intervene.

This is happening yet again this week… and the Fed has a choice:

If you think I’m being dramatic here, take a look at the following charts.

Exhibit A: Oil is carving out a major “head and shoulders” formation.

Either the Fed begins to intervene or oil goes to sub-$30 per barrel. That would mean the world entering a deflationary implosion – the very thing the Fed has been trying to stop from happening since 2008. 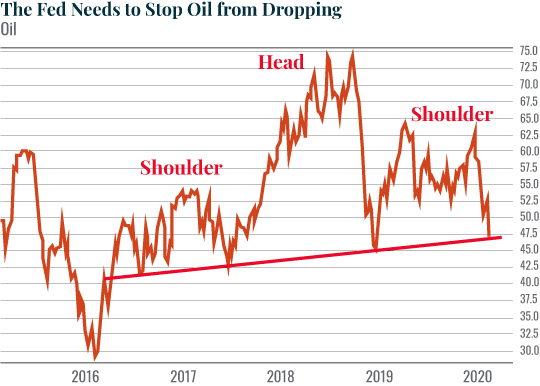 Exhibit B: Freeport-McMoRan (FCX), the largest copper producer in the U.S., is also carving out a major “head and shoulders” formation.

Either the Fed intervenes or we erase ALL of the gains from the 2016 low. And again, the world would sink into a global deflationary depression a la 2008. 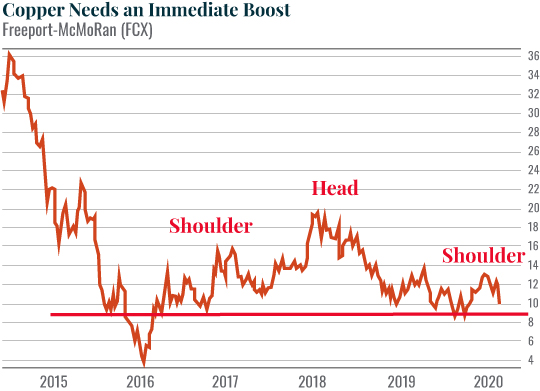 Exhibit C: Caterpillar (CAT), the largest machinery manufacturer in the world, is starting to fall.

Either the Fed starts to intervene, CAT bounces hard, and the “recovery” remains in place or… we erase ALL of the gains of the last FIVE years’ worth of recovery… and enter a deflationary collapse. 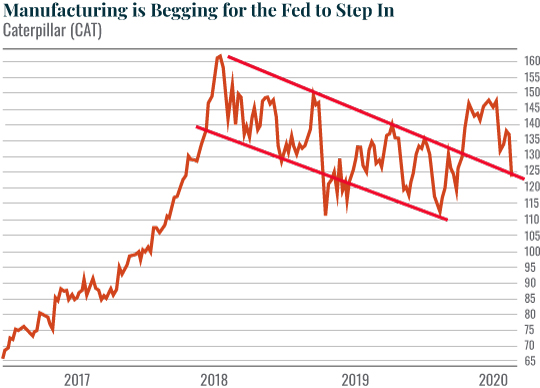 Is this time different?

Has the Fed finally “got religion” and will let stocks collapse without intervening?

Is the same Fed that buckled like a paper plate a mere 14 months ago – abandoning all of its talk of normalization, introducing three rate cuts, a $60 billion per month QE program, and two separate repo programs – suddenly going to let the markets collapse?

It’s possible. But I don’t believe this will be the case.

Consider this: Every single Fed chair since Paul Volcker has lost every game of “chicken” with the stock market.

Now, I’m not saying I like the Fed… or even that a Fed intervention is the RIGHT thing to do…

I’m just saying that I believe the Fed will lose this game of chicken with the markets and stage an intervention over the weekend or early next week.

And with that comes an enormous opportunity…

How to Score Big on the Next Fed Intervention…

As I’ve shown you often, I believe the Fed manipulates markets all the time.

If you can find a way to get ahead of those massive moves, you’ve got a proven strategy to have the opportunity to make big money.

And that’s just what I’ve done.

So you can identify the next intervention as it happens.

Giving you the chance to be alerted to major stock price moves before they occur.

If you’d like to get the details on my brand-new system through my research service… and learn how to score big on what I believe are going to be monumental central bank moves in the coming days, please click here.