If you ever want to see boxing at its most elite level, you need to watch Vasyl Lomachenko.

Lomachenko’s skill level as a fighter is almost ungodly. His record as an amateur fighter was an astonishing 396 WINS and one loss.

And he would avenge that loss on two separate occasions. During that time period, he won two gold medals in boxing.

Lomachenko turned professional in 2013 continuing to set records. He won his first title belt in his second fight (a tie for the world record) and has since won titles in three weight classes within 12 fights (a standalone world record).

The guy is so talented, I actually watched him win a fight one handed when he broke his left hand (his dominant hand) in the sixth round of a fight. Lomachenko continued the fight using his weak hand for the last six rounds, completely dominating his opponent… again… with one hand.

However, as unbelievably talented as he is, even Lomachenko has been knocked down flat on his backside.

The particular instance took place in the sixth round of his fight against the Venezuelan lightweight champion Jorge Linares. Linares caught Lomachenko flush on the face with a power shot, sending the legend backwards onto the canvas.

Lomachenko picked himself up and went on to win the fight in the tenth round with a perfectly placed liver shot. Linares doubled over and despite his best efforts, couldn’t get to his feet in time to beat the 10-second count.

So… why do I bring this up?

I was thinking about this fight last week when the stock market collapsed some 15% in six trading sessions.

Like the great Lomachenko, the current bull market in stocks has been a record setter:

However, like Lomachenko, this bull market took a bad spill last week when fears of the coronavirus, combined with the Fed pulling liquidity from the financial system, led to one of the worst selloffs in history, with stocks losing 12%-15% across the board in a single week.

Is this the end?

Like Lomachenko in his bout with Jorge Linares, stocks are picking themselves up and preparing their next attack. As I write this, the S&P 500 has bounced HARD and has retaken its 200-day moving average – an important metric for determining the trend. 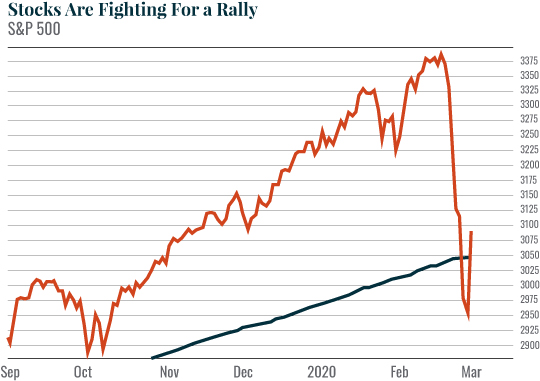 This is just the start of a major comeback.

Junk bonds lead stocks both to the upside and the downside. And junk bonds are telling us stocks are on their way to 3,200 on the S&P 500.

In the chart, junk bonds are in orange, stocks are in dark blue. 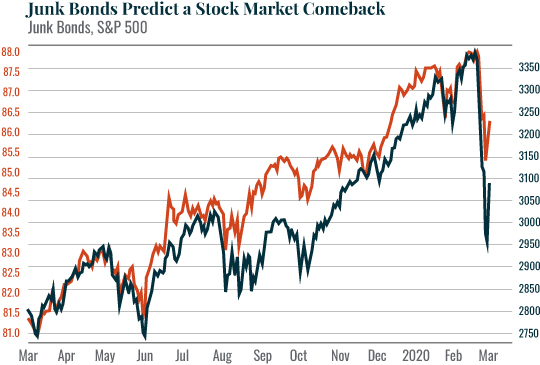 For this reason, throughout last week I urged all of you to use the collapse as a buying opportunity. It’s already paying off.

And by the look of things, there’s A LOT more money to be made from this bull market.