After all, generally speaking, an emergency rate cut of 0.5% is historically a GREAT thing for stocks.

I need to warn you in advance that this piece will feature some political commentary. And if you are a Bernie Sanders supporter, you shouldn’t read any further. But then again, if you’re a socialist, I can’t imagine you’d want to read about the stock market to begin with. So…

With that out of the way, let’s move forward.

Yes, the Fed cutting rates is a good thing for stocks. But no amount of Fed cuts or monetary easing would mitigate the potential economic disaster that would be a Bernie Sanders presidency.

And up until this morning, Sanders was looking like he’d be the Democrat candidate.

Consider that the market literally peaked the night of the Dem debate in Las Vegas. Sanders did well, while the Democrat establishment candidate, Joe Biden, did terribly.

And this came after Sanders managed to do extremely well in both Iowa and New Hampshire.

Again, that night literally marked the peak for stocks.

After that, they began to collapse, entering a total freefall when Sanders won Nevada. If you think that’s a coincidence, consider that stocks didn’t even bounce until Joe Biden began to rebound in the polls and won South Carolina.

See for yourself in the chart below: 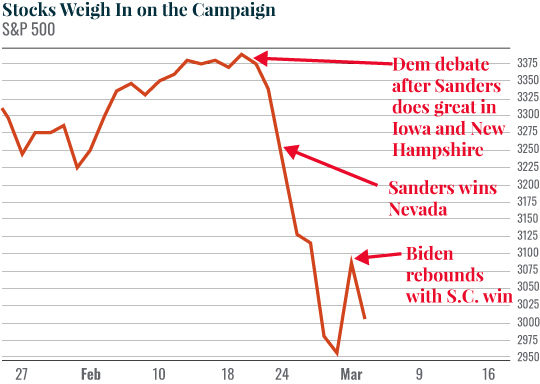 Which brings us to yesterday…

The Fed performed an emergency rate cut of 0.5%. Stocks initially exploded higher on the news – before retracting most of the gains as they realized Bernie Sanders could still be the Democrat candidate.

Again, no amount of Fed easing would be able to contain the economic collapse that a Sanders presidency would trigger. And the markets knew it. 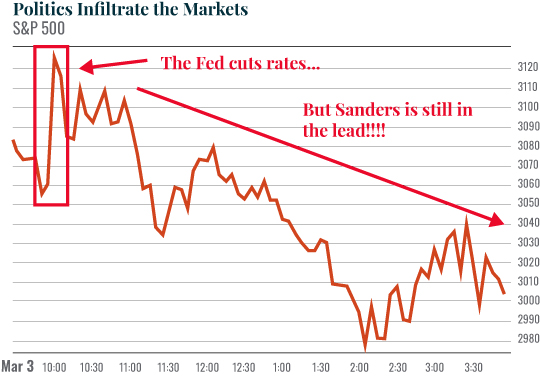 Which brings us to last night, when Joe Biden won Super Tuesday in a big way.

Guess what happened? Stocks EXPLODED HIGHER on the news.

Election 2020 Will Determine the Fate of Stocks

As I write this morning, the market is up MORE on this news that it was when the Fed performed its emergency rate cut of 0.5%.

Again, Bernie Sanders LOSING Super Tuesday did more for stocks than the Fed cutting rates by 0.5%.

It’s not surprising. Socialism would be an absolute disaster for the U.S. economy. Most socialists imagine the U.S. under socialism as being identical to how it is now, with the exception being that everything is free.

That is a fantasy.

If you want to get a taste of what socialism in the U.S. would be like, go spend an afternoon at the DMV, the Post Office, or Veterans Affairs. Those are government run programs AKA a form of socialism.

Speaking of the VA, some of you are probably wondering why I’m so anti-Bernie Sanders. The reason is simple.

Bernie Sanders was in charge of oversight for the VA during the worst scandal in history.

Despite dozens of whistleblowers and clear signals that the organization was corrupt to its core, Mr. Sanders ignored everything because he was worried that addressing the issue would make socialized medicine look bad.

Again, Bernie Sanders let veterans literally die in waiting rooms while VA bureaucrats embezzled millions of dollars because he didn’t want socialized medicine to look bad. In fact, he defended the VA at the time, claiming that the criticism of the organization was a “right wing conspiracy.”

The good news is that it is now clear Sanders will not win the Democratic primary. Which means the door is open for stocks to hit new all-time highs later this year.

Indeed, the long-term chart suggests stocks are going to 3,600 if not higher. 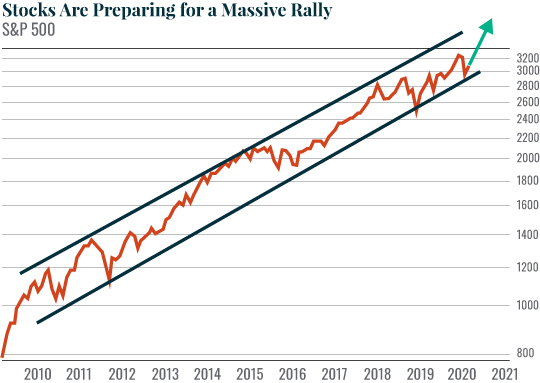 The fact is, even with all these little ups and downs and twists and turns, the story is ultimately playing out just as I predicted it would.

After the “Bernie-virus” fears subside, and the dust settles, people will realize the rate cut is exactly what Trump wanted and needed.

And if his tweets are anything to go by, he’s still not finished. He wants more cuts.

Remember, his election victory rests on a strong and booming U.S. economy and as the chart above shows…

It looks like Trump will get what he wants.

Because if you’re quick, there’s still chance to potentially make a killing in the run-up to Trump’s victory.

Check out the presentation here and don’t delay.