Over the weekend, Russia and Saudi Arabia ended their truce regarding oil production cuts. The two countries had originally agreed to a certain amount of production cuts in 2016, which had helped stabilize the financial system during a difficult time.

The U.S. shale industry requires oil to be around $60 per barrel or higher. Russia is sensing the U.S. is weak right now and has decided to attempt to bankrupt our shale industry.

Saudi Arabia, which has a much lower production cost than Russia, is moving to call Russia’s bluff by threatening to flood the world with oil.

All of this resulted in oil prices collapsing 30% over the weekend.

The stock market HATES surprises. And this was a big surprise. As I write this Monday morning, the futures markets (which trade overnight) have been halted because they fell 5%.

This triggered circuit breakers. So the market was simply closed.

This is BAD stuff.

What are the odds this leads to a real crisis?

Last week, the odds of a crisis hitting the U.S. were actually quite low. Not anymore.

The U.S. corporate bond market is $10 trillion in size. Some $1.5 TRILLION of this is junk… meaning any economic hiccup could result in default.

This is Subprime 2.0: the riskiest debt in a market saturated with debt.

A MAJOR chunk of that is U.S. shale energy bonds. The weekend collapse in oil prices could easily begin to trigger defaults in this space, which in turn would bring the entire junk bond market under duress.

To make matters worse, there is another $2.8 trillion in corporate bonds that are only slightly higher than junk bunds. These are bonds that are considered “high quality” but in reality, are probably junk as well. And a significant downturn could lead to major defaults here as well.

Put simply, up until this weekend, the market was collapsing due to fears of a possible economic fallout due to the coronavirus.

Today, the market is collapsing because the oil collapse could trigger a MAJOR CREDIT EVENT similar to 2008.

And that could indeed END the bull market and trigger a REAL crisis.

Maintain Your Discipline As We Wait for Clarity

The chart to watch is for Junk Bonds (HYG). We’ve just broken down from a rising wedge formation. The first line of real major support is $80. If that breaks, it’s CRISIS TIME. 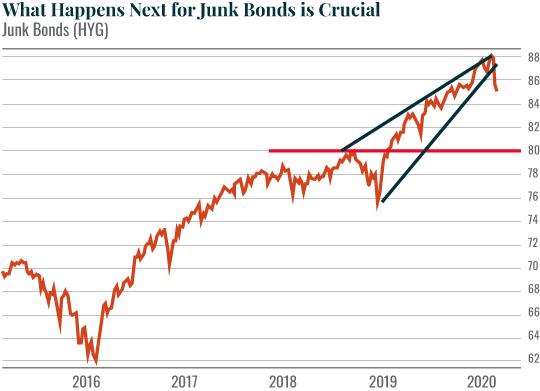 However, if it holds, then this is the buying opportunity of a lifetime.

We are still early on this. The good news is that this situation is creating REAL panic, which opens the door to the market bottoming.

Markets never bottom based on ongoing worries or uncertainty. Markets bottom on absolute panic when sellers have exhausted themselves.

We are now at that point.

So while the market is a sea of red this morning, this is our first legitimate opportunity for the stock market to actually bottom and begin forming a real base.

This is a dynamic situation with a lot of moving parts. I’ll be providing updates as needed. But right now is NOT the time to panic. Now is the time to maintain your discipline and watch what happens.

If a crisis hits, we’ll get out of its way well in advance. If the market bottoms and we begin a new bull run later this year, you’ll be grateful you didn’t sell.