How has this happened so quickly? The data from February alone suggested the U.S. economy was actually quite strong (payrolls, employment, inflation, etc.). And as I wrote a few weeks ago, this looked to be a “great buying opportunity” for stocks.

The U.S. began to panic. And the panic has now spread throughout most major sectors of the economy.

What started out as panic in isolated industries that are closely aligned with travel (airlines, cruises, etc.) has spread throughout the entire U.S. economy.

All of these moves have very real economic impacts.

You get my point.

Again, the U.S. economy has screeched to a halt and is now likely in recession.

Whether it’s a deep recession or a mild one is impossible to tell. But all of this changed in just three to four weeks. It’s the fastest move from expansion into recession in decades, if not ever.

And this recession is triggering a credit crisis in high yield debt/credit.

And it has just entered a bear market.

On Monday, I mentioned that the chart to watch is for Junk Bonds (HYG). If it was to break to the downside, that would signal CRISIS TIME.

Now, the Junk Bond ETF has officially broken its bull market trendline running back to 2009. Meaning, Subprime 2.0 has burst. 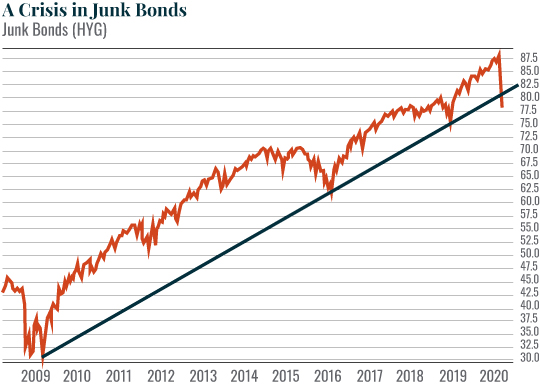 As you’ll no doubt recall, the 2008 crisis happened when the Subprime crisis spread to other less risky mortgages that had traditionally been considered “safe.”

There is $2.5 trillion worth of investment grade bonds that are just one step above junk. This stuff is also likely junk… but managed to make the credit requirements necessary to avoid being designated as such for now.

These bonds have ended their bull run and will be testing their long-term bull market. We do not have a crisis in this sector yet. If we take out that blue line however, things get BAD. 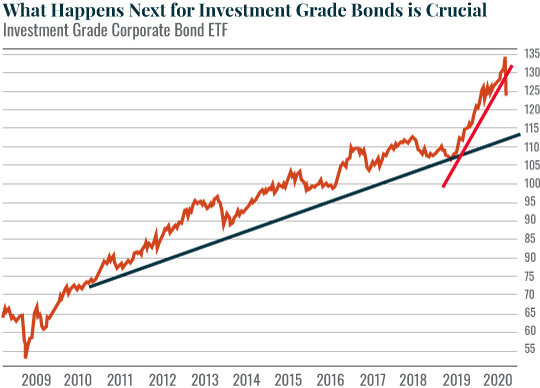 So… where does this leave stocks?

If Stocks Bounce… Here’s What To Do

Stocks are EXTREMELY oversold and due for a bounce.

That bounce will be coming very shortly. And I suggest using it to unload long positions at better prices. Indeed, both the bond and currency markets are telling us this bounce is coming shortly.

After unloading some long positions once that bounce occurs, I’d then suggest looking into opening some shorts.

I’ll have some examples of the investments I’m talking about in tomorrow’s article.