[Publisher’s Note: With coronavirus fears mounting over the past week, stocks have fallen at a faster pace than any time in history. Yesterday’s decline was the largest one-day drop since the 1987 crash. Whether it’s due to overblown media hype or not doesn’t matter. The market hates uncertainty. That’s why I called each of our expert editors this week – to provide some much-needed clarity. Click here to listen in. Next week, we’ll hear from 10x trading champion Chuck Hughes. Plus, we’re getting former CIA agent Jason Hanson on the line, who can offer helpful tips for keeping you and your family safe if a potential crisis scenario emerges.]

The markets are bouncing limit up this morning on two things.

Is this the start of one… or is this just another one-day blip similar to that which happened on Tuesday? I have no idea. And in fact, no one does.

Investing is not about being psychic. It’s about playing the hand you are dealt.

The hand we have been dealt today is this:

Unfortunately, that is not the worst news either.

Behind the Scenes, the Situation is Grim

Do NOT let the market rally distract you from what happened yesterday.

Yesterday, the Federal Reserve, the single most important central bank in the world, announced a $1.5 TRILLION repo operation as well as a new quantitative easing (QE) program…

And stocks only rallied for FIVE minutes. Before closing on the LOWS. 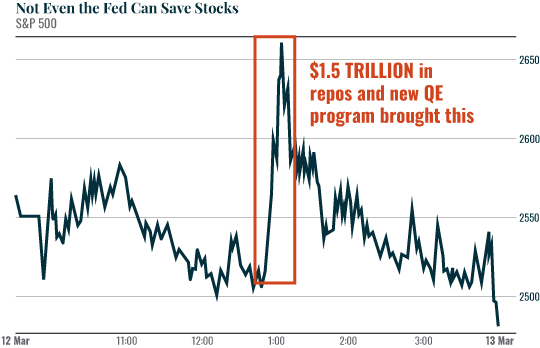 Again, stocks had their worst day since the 1987 Crash on the day the Fed announced a $1.5 TRILLION intervention. That is THE story of this week.

Something truly HORRIFIC is happening behind the scenes. We’re talking about something far worse than Lehman Brothers.

Some large, and I mean LARGE, entity is in MAJOR trouble. Think Deutsche Bank, UBS, or something of that size.

What’s TRULY horrifying is that bonds actually COLLAPSED yesterday, despite the Fed announcing this $1.5 trillion program.

If bonds cannot find a floor when the Fed announces QE 5 as well as $1.5 trillion in repos, then we have a problem that is far, far greater than anything the world has ever seen. 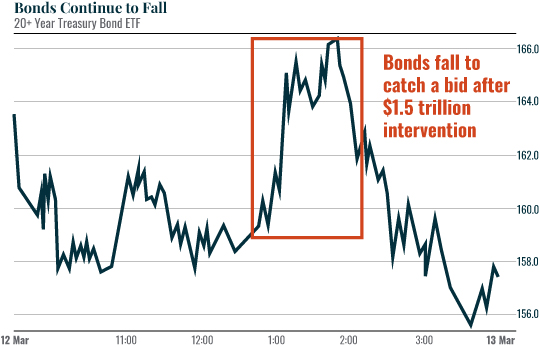 What the Fed did was not a bazooka… it was a NUCLEAR option. And it didn’t stop the collapse.

The Fed now has few options left. Meaning if the market bounce doesn’t last, and stocks turn down again… the Fed is effectively POWERLESS to stop what’s coming.

So what happens now?

The only two comparable situations in history that I know of are the 1987 Crash and the 1929 Crash, which saw stocks lose 34% in 11 days and 20 days, respectively.

In both instances, stocks bounced only two days or so before revisiting the lows or falling to new lows.

This time may be different, but history suggests the lows are not in on this bear market just yet.